How a po-dunk restaurant goes viral

by Next Wave Team | Jun 4, 2006 | Advertising, Everything You Want to Know About Advertising, Future of advertising, Guerrilla Campaigns, Marketing & the Web, Viral Marketing, Web strategy | 177 comments 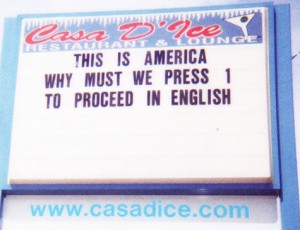 If it's America, shouldn't Casa d'Ice be House of Ice?

Everyone can get their 15 minutes of fame, thanks to the Internet. Some pastors have managed to do the same with weekly church sign-board messages (7 days without prayer makes one weak, etc.) but Casa D’Ice has taken their owners political pontificating on his sign board and generated a viral campaign that came into my e-mail box this morning.
You may, or may not agree with his messages- but, you might spend more time reading these political rants than you would watching a low budget local TV spot on cable for his restaurant.
I’ve never been to North Versailles PA, but if I did- I might go to look at his sign- or ask what the locals think about his restaurant.
Guerrilla marketing at work.

What do you think of Mr. Bill Balsamico’s marketing campaign?

Our advice would be to alt tag the images- and change the site to have an RSS feed- but, if you’ve read much of our site- and about our Blogosopher seminar- you already would know that.

Please note- this is story about viral marketing- if you want to contact Mr. Balsamico, his e-mail is [email protected]

It is unlikely he will read the comments below.