A local state university president, already facing a budget deficit, is quoted in the paper suggesting that “more cuts are needed” and that the Coronavirus is destroying their ability to enroll students. This is not the message to send, even if it may be true. There is no urgency in her plans, because she assumes the university will survive, will be bailed out, she’ll have another job. The future is not something we can control, but it’s also inevitable and it’s your job to adapt and plan to win, not to admit defeat and attempt to manage.

Need proof? Steve Jobs came back to Apple in 1997 and the company was on it’s death bed. New products, including the innovative iMac were a year away. The first thing he does is look for a new ad agency. Chiat\Day, which had been the agency that gave him the iconic “1984” spot introducing the Macintosh had been off the account for 10 years when they were invited back to pitch. Now, one of the hottest shops in the country, the plan for Lee Clow and Rob Siltanen was not to pitch- to walk away if asked, so when Jobs demanded spec work, Siltanen was ready to walk, but Clow said they’d be back.

The campaign they came back with, “Think Different” didn’t show photos of computers. It wasn’t even grammatically correct, and Jobs had said he didn’t want TV, but they came back with a rip-o-matic rough cut of a 2 minute spot showcasing famous folks who walked to the beat of a different drummer set to the song “Crazy” by Seal. Only problem was, it was 2 minutes long and they needed something more compact. After Siltanen did his best to write a new voiceover- Jobs trashed his work and alienated him. Another writer was brought on, Ken Segall., and he gave us the final script for “Here’s to the crazy ones” which was as much an ode to Jobs as to the people featured in the campaign. It was the right bet, and set the stage for Apple’s comeback. The string of products, from the iMac, to the iPhone to the iPad changed the world- all as predicted by the campaign which was as much manifesto as it was aspirational, because Apple was down, and almost counted out. Jobs wasn’t throwing in the towel, he was focusing his brand on attaining greatness, which is the exact right thing to do in a crisis.

With the whole world in shock over the Coronavirus crisis, many leaders (and university presidents) have thrown in the towel. Most have directed their agencies to do ads that all sound the same “in these unprecedented times” and “we’re all in this together” kumbaya bullshit.

“If everybody is thinking alike, then somebody isn’t thinking.” — General George Patton

It’s so bad, you can cut them all together and get- well, someone already did:

This is not the answer. Ever. Doing what everyone else is doing is exactly the point that “Think different” railed against. Now, of all times, is the time to launch your brand with a new message, a new way of doing things, a new commitment to reach new heights. It’s called adapting, and it’s critical to evolution. We were adapting before the crisis- to the new gig economy, to software as a service, to a new media landscape where “fake news” was somehow acceptable.

The pandemic was just a unforeseen misdirection to most. Yes, Bill Gates saw it coming, but didn’t do a good enough job of raising the alarm. Now, the question is, will you rise to the challenge? Will you adapt, overcome and succeed? The PhD flails and fails, the college drop out swings for the fences. It’s easy to be a “leader” when things are predictable- but the true test is when they’re not.

“A leader is a dealer in hope.” — Napoleon Bonaparte

“The best executive is the one who has sense enough to pick good men to do what he wants done, and self-restraint enough to keep from meddling with them while they do it.” — President Theodore Roosevelt

The funny thing is, Steve Jobs was inspired by Nike’s advertising and looking for his own version of it when he came back to the sinking Apple.

“The best example of all, and one of the greatest jobs of marketing the universe has ever seen is Nike,” Jobs explained. “Remember, Nike sells a commodity. They sell shoes. And yet when you think of Nike, you feel something different than a shoe company. In their ads, they don’t ever talk about their products. They don’t ever tell you about their air soles and why they’re better than Reebok’s air soles. What does Nike do? They honor great athletes and they honor great athletics. That’s who they are, that’s what they are about.”

Jobs went on in the talk to announce Apple’s newest ad campaign, which used the tagline “Think Different,” and featured pictures of legendary thinkers like Albert Einstein, Martin Luther King and John Lennon. The ads didn’t describe Apple computers’ specifications or functions, but instead gave a sense of the company’s mission.

And when you want to see a company give the right response in troubled times, Nike, with their agency for life, Wieden+Kennedy, get it right, right now:

Because, once you admit you are down, if you don’t start talking about a comeback, you will never have one.

“We succeed only as we identify in life, or in war, or in anything else, a single overriding objective, and make all other considerations bend to that one objective.” — President Dwight D. Eisenhower

We’re not saying we have the answers for the Coronavirus crisis you are facing, but, we’re here to help brands find a voice that is uniquely theirs and projects hope for a better future. This is what advertising does- it creates lust, evokes trust- and triggers an emotional response. If your campaign doesn’t inspire folks while they are desperate for a comeback, don’t even consider running it.

“We need to learn to set our course by the stars, not by the lights of every passing ship.” — General Omar Bradley

Apple showed us how it’s done. Are you ready to Think different?

A Creative Solution for Disney Parks and Covid19 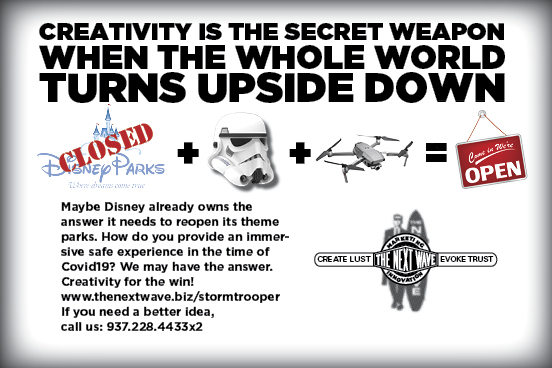 Disney has closed their theme parks because of Covid19 and the difficulties of social distancing in a space where people are supposed to get together. Coronavirus isn’t going to go away tomorrow, so what is the answer to opening the parks back up- and making it a magical experience? Does Disney already own the answer?

What does a Stormtrooper and a drone have to do with making the park safe? Well, we’ll share.

Suppose Disney makes real Stormtrooper helmets, that allow you to breathe highly filtered air on your visit? And suppose, we gamify your experience, by building in the same obstacle avoidance system that drones use to keep them from crashing? Every visitor would become a stormtrooper, complete with helmet and gauntlet gloves. Each helmet would be programmed to allow you to be within 6 feet of your family, but, no one else. An audible will go off when you are too close to others. You’ll be given a score that reads in your heads-up display in your visor on how you’re doing. The less contacts, the more rides, the higher the visitors score. The gauntlet gloves- when you make a push sign toward others- will send a signal to others helmets- and increase your score as well as warning them to stand back. People who don’t obey distancing, would eventually be told to return to base for retraining.

Would it be expensive to build the hundred thousand helmets and the gamification systems, sure, but, everyday the parks are closed is costing tens of millions. Estimates of the costs of the closures come in at half a billion. And that’s not including the rest of the tourism ecosystem of hotels, airfare, tourism.

Disney is full of imagineers, they’ve made money with creativity for years. Why not make the parks a true, full time, immersive experience?

And the best part? Who didn’t want to be a stormtrooper, at least once?

How Costco could use customer data to save lives

There is a reason companies involved in retail food distribution are paying their employees a premium during the Coronavirus Crisis, workers are risking death to come to work. And while the idea of strolling through the aisles and shopping as if nothing has changed may be reassuring to many, with every touch of a freezer door handle, checkout register, or close contact with a cashier, the risk of transmission rises. This is not how to do business in a pandemic, especially if you are sitting on every customers complete buying history through your database.

Costco has already seen the mad effect of hording, and has limited purchases of items in high demand. But, this still doesn’t solve the human interactions involved in processing these sales using their conventional sales processes. And, setting certain hours aside for seniors is nice, but, not protecting your employees anymore than normal.

This is a new normal, and the solution is simple: Build a list of every customers historic purchases based on frequency of purchase over the last 3 years. Create a pick list, with items purchased most often at the top. Send a pre-built cart to the customer via their customer ID- allow them to place an order, and have it picked, waiting for pickup outside the store at a designated time. Set the limits based on historic purchases- ie: I buy 18 rolls of Kirkland toilet paper every 8 weeks. The same would go for the new reality.

The non-grocery purchases, from toaster ovens to TV’s would still be available via the same cart- without restriction other than inventory constraints. And while there are some items that Costco may stock that I may need that are in high demand, but, I’ve not bought before, like a thermometer or hydrogen peroxide, these would be managed like any other inventory item, as needed, after the people who’ve historically bought it regularly have had first dibs.

While this system is being built for the Coronavirus crisis, it may become the new norm, especially as more people learn to plan more, shop less and realize that time is still a precious commodity.

As to the additional cost of having employees pick and fill orders, add a per order surcharge based on the size of the order. Trust me, customers will be willing to pay, and employees will feel a lot safer not having to interact with as many customers and risk contamination.

While this isn’t possible for most smaller businesses who don’t have the customer data, or the technology behind it, if there is anything this crisis will teach companies- it’s the value of a seasoned employee, who knows your business and how it operates. The costs of training, the costs of hiring, will become incredibly clear for those who lose parts of their workforce due to the pandemic.

Free is the most powerful word in advertising. Knowing good advertising from bad advertising is the most important skill in advertising. Because we can’t expect all of our clients to go to some expensive ad school and learn what works and what doesn’t, we thought we’d provide a free education for them, and also for the budding young professionals who we hope to employ some day.

This is the introduction. We released the first three episodes all at once, so once you finish this one, on to the next at the tail of the video.

If you enjoy it, please subscribe to the youtube channel. And, consider leaving some comments or questions below.
We’d love to know if you want some other materials to go along with each episode.