You can be creative in 15 seconds

When the Dayton Bombers called and wanted a 15 second spot, all they thought that could be in there was date and time. Had they had the station do it- they would have had some news footage, with graphics on top and the same announcer that does every single local spot on the air.

The reality is, no one cares about your hockey game that doesn’t already know about it. Advertising is supposed to make people who don’t care- care. Good ads get your attention, and suck you in. Bad ads tell you about a product you could care less about.

Simple connections between client and consumer happens when you grab a fundamental truth- and make it relevant. Here we use “hockey is painful” - complete with missing teeth, black eyes, broken nose and organ music more fit for a funeral than a hockey game.

Getting the message to resonate with something the customer already believes is a great first step to engaging them in your brand. Even in 15 seconds.

One thing that drives me nuts about the advertising business is that many clients still think of spending money on advertising is a gamble. I’ve never felt that way, because, as our motto says “our job is to make you more money than you pay us.” Advertising, when done right, is never a gamble- it’s an investment. 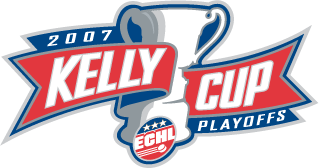 So why am I feeling like a gambler for the first time in my ad career today? Because our client (of late) the Dayton Bombers, are playing game 7 of the Kelly Cup semi-finals tonight- and if they win, we get to do the campaign for the finals and if they loose- we don’t get the job. Money riding on a hockey game- who woulda thought?

Because we believe we have to provide something useful in everything we post- a few tips on making sure your advertising doesn’t feel like gambling:

Hope that helps. Now, all the Bombes have to do is win tonight, so we get to keep building their brand.

There is a secret to great advertising- and it’s not the size of the agency or the number of awards on the wall. It’s not how hip the creatives are, or how cool the offices or even how big the budget is. And even though you could argue that the quality of the account planning can make all the difference in the world- it’s not what makes great ads.
What makes great advertising is the same thing that makes great leaders, great athletes, great scholars – basically great anything, and it’s one word: passion.
If the people coming up with the ad have a passion for the task at hand- and know the product and who they are trying to reach- you will end up with advertising that doesn’t suck- the kind that actually brings in the big bucks- without costing big bucks.
It’s taking what you have- and turning it into something that is a bit more than advertising- it’s a conversation that you just can’t turn away from. It’s a battle cry that resonates and won’t go away- be it “Where’s the beef” https://www.youtube.com/watch?v=Ug75diEyiA0 or “Whazzzup” https://www.youtube.com/watch?v=2GWrrTpJ1eU- it sticks in your head like peanut butter to the roof of your mouth.
When you are in the business of advertising, and know a good ad from a bad ad, you can tell when you do something great- because you can’t get it out of your head either.
So, here’s the latest in the saga of pulling rabbits out of the hat for the Dayton Bombers- a client that no matter how vexing the time frame, budget, material to work with- brings out the passion from us at The Next Wave.
It comes from two things: we love ice hockey and, we love it when underdogs are kicking ass and taking names. The Bombers are in Florida right now- about to play the first 2 games of the semi-finals before heading back for 3 possible games at home. We were asked to put together a poster for the games- over the weekend- so far, everyone who has seen it has loved it. We hope you do too.
Come to the Game Saturday night- and maybe you can get one too. 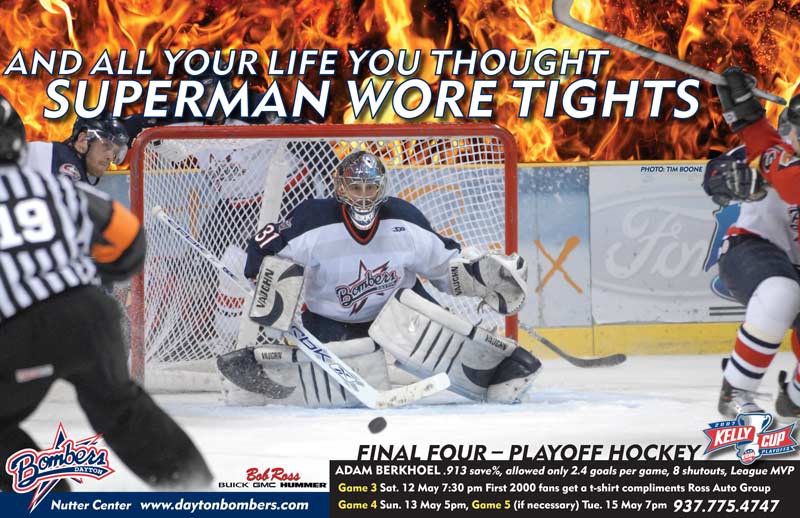 by Next Wave Team | Apr 15, 2007 | Ad Agenices in Dayton, OH, Advertising, Advertising Case Studies for The Next Wave, Dayton Bombers Advertising, Differentiating Your Brand, Everything You Want to Know About Advertising, How To Select An Ad Agency, Low Budget Advertising, Public Relations in the Web 2.0 world

Other than editing out the personal information- this e-mail was received by the Dayton Bombers:

I have a number of health and physical problems, at age 72, and need to laugh more. For the first time tonight I saw your “Rumanian” ad on TV with Yannick Tifu and had a good one. Does his “cup runneth over”? LOL! Good work by whoever came up for the idea for that ad…it does catch one’s attention. Some “soft” adult humor, like this ad, flies right over the heads of kids, so no harm done. It made me want to attend a game, or maybe regularly.

I no longer drive and sold my car last December. Does RTA stop AT THE DOOR of the Nutter Center? I walk with a cane and easily get winded. What is the number of that RTA line? (Cabs cost a FORTUNE now.) I live at the Oakwood-Kettering line between Far Hills & Ridgeway Rd. and use #5 or #14 for trips to CBD.

What is the lowest cost for a single game ticket? Are they always available on game dates at the Nutter box-office?

What is the lowest cost for one seat at a series of home games bought in advance (for different game counts)? Five games, ten, etc. Is there a seniors’ discount? Golden Buckeye card?

What is the temperature in the stands? Us old folk chill easily so would I need a sweater or jacket or is it always very warm in the stands?

When does the season end? Please mail me some general brochures.

I guess I’ve BOMBARDED the BOMBERS with enough questions for now. I know…that is NOT funny and you hear it all the time. Thanks!

The spot that the new, 72 year old, hockey fan saw?

It was aired on broadcast TV- and was enough to get an old guy, in poor health, motivated to seek information on how to ride the bus to the Nutter Center (not an easy trip from where he lives).

When was the last time your advertising did that? Especially a spot entirely in Romanian?

Of course, they also got a call: “this is America, you should do your commercials in AMERICAN!” (see our post on Casa d’Ice and their signs for more on this subject: http://thenextwave.biz/tnw/?p=174 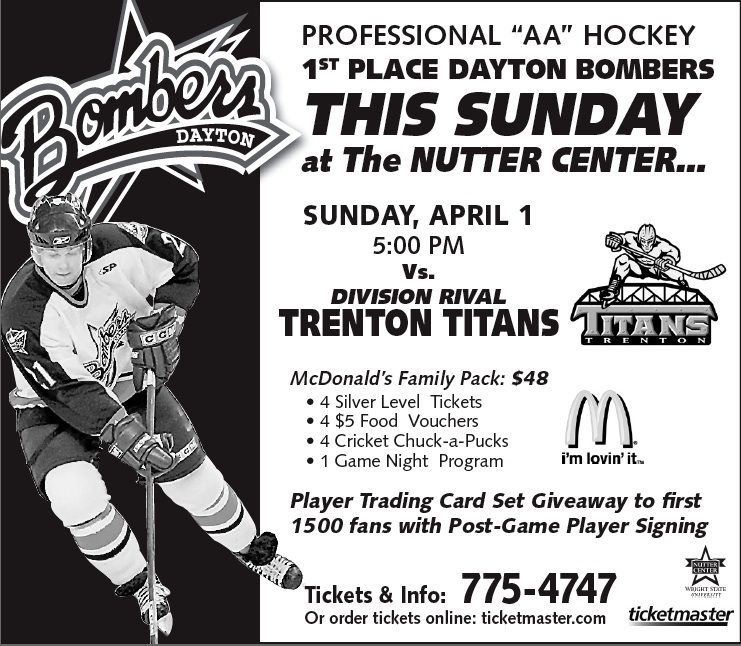 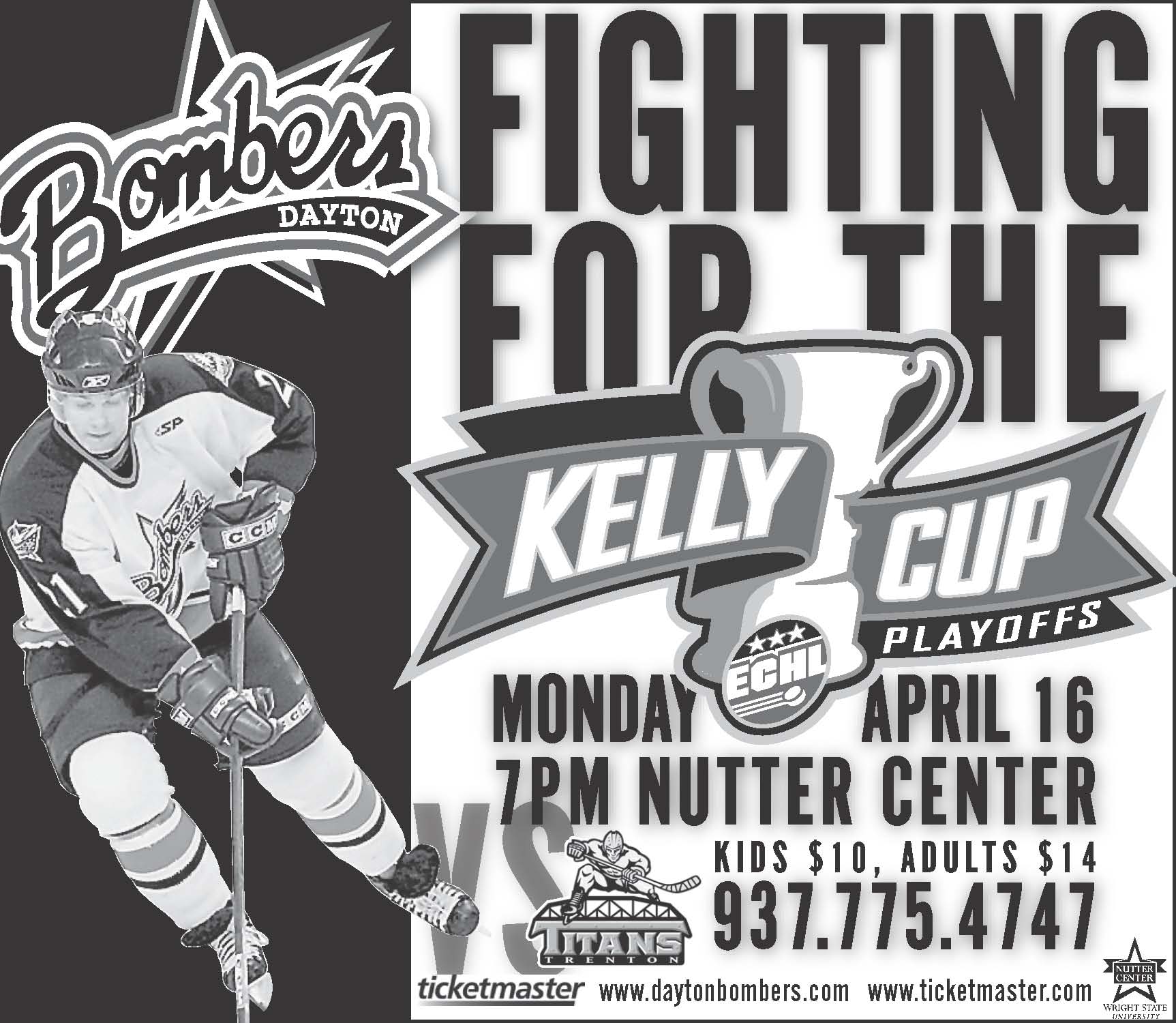