Not another company on earth that could do this campaign

by Next Wave Team | May 12, 2016 | Apple Advertising, Secrets of Great Advertising

September 23, 1977. Steve Jobs walks into a conference room to introduce “Think Different” internally. Khaki shorts, long sleeve black turtleneck with the sleeves pushed up- looking tired.
It’s an 18 minute presentation that anyone looking to turn a brand around should watch.

It’s not about speeds and feeds. It’s not about a better product. It’s about the core values of the company- and where does Apple fit in this world.

Yes, he begins with the product line being too complex, the distribution channel being too long and heavy, and that they spend a ton of money on advertising- although “you’d never know it.” He doesn’t blame his predecessors. He looks to the future and thinks about what kind of people he wants to build products for: “we believe that people with passion can change the world for the better.”

They get to use people that had never appeared in an ad- or ever world- for any other company. Partially because they aren’t talking about themselves, and partially because their leadership understood that doing great work comes first.

He cites examples- the milk processor board spent 20 years advertising “Milk is good for you- even though it really isn’t” and sales didn’t move- and then, Goodby Silverstein comes up with “Got milk” – which actually advertises the lack of the product and sales climb.

Jobs says that Nike, who makes a commodity- shoes, doesn’t sell shoes, and does advertising the “best of anybody” by honoring great athletes and athletics. Side note- Nike, for the most part has used Wieden and Kennedy for the brand since the start. Believing and trusting your ad agency is another good lesson. Jobs went right back to Chiat/Day for this campaign for a reason.

The result- is the “Think Different” campaign. Which literally changed everything. People listened to an ad. they watched it over and over- before YouTube. The words from this ad, turned into posters, were remembered as a eulogy for Jobs because it was so different.

Watch the video about the introduction. Learn. (sorry the actual commercial has the music cut out- you can watch the full final spot below). 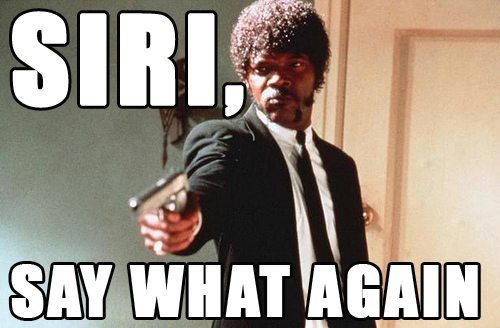 The video featuring Jackson shows him cooking a dinner for “date night”, asking Siri about organic mushrooms, and doing a few other things that don’t involve yelling “Mother f****r!” (which, I admit, is a little disappointing).

Deschanel, meanwhile, is shown in her pajamas doing her usual cute and quirky things like ironically asking if it’s raining, asking Siri to remind her to clean her room (tomorrow), and goofily dancing out of frame.

The ads are a noticeable break from Apple’s usual advertising style. While Apply has used highly-visible celebrities in their TV spots in the past, these days Apple rarely uses celebrities for their ads other than for Voice Over, opting more for product-focused advertising.

In a departure from its product-as-hero ads of the last few years, Apple has enlisted a pair of celebrities to hawk Siri.

Samuel L. Jackson and Zooey Deschanel star in the ads, which broke Monday night. In Jackson’s ad, he uses Siri to help cook a meal for “date night” and asks Siri to “find me a store that sells organic mushrooms for my risotto.” (Sorry fans, Jackson doesn’t drop any expletives in the ad.)

Deschanel, meanwhile, plays on her quirky/cute appeal and, noting it’s raining, asks Siri to find someone to deliver tomato soup. Then, she asks Siri to remind her to clean up — tomorrow — and then to play “Shake, Rattle and Roll” so she could dance today.

It’s unclear whether these ads, from longtime agency TBWA\Media Arts Lab, represent a new direction for Apple. The brand has typically opted to use celebs — including Richard Dreyfuss and Jeff Goldblum — for voiceovers.

The ads do raise a few questions: Could this be the start of a new campaign for Apple and TBWA\Chiat\Day? Why did they choose Jackson and Deschanel? Should we expect to see more Siri-celeb ads out there soon? Perhaps the intention was to poke fun at celebrity-based ads. After all, in the Samuel L. Jackson ad he is departing from his stereotypical bad-boy character while Zooey Deschanel is playing a highly exaggerated version of her character. Whatever the intention is, we will be keeping our eyes peeled for upcoming Apple ads.

Oh, and by the way, there’s a soundboard app called iSamJackson. You’re welcome.

Here's to the crazy ones

We’re still trying to imagine a world without Steve Jobs.
If you haven’t read his sisters eulogy, you should: “A Sister’s Eulogy for Steve Jobs” New York Times link.

The “think different” spot that was created soon after Steve returned to Apple, and moved the ad account back to Chiat/Day and rekindled the relationship with Lee Clow, may be the best short tribute to Steve, even though it’s from 1997.

As a memento, tribute and gift to you- we’ve taken the spot and created a poster for you to print and hang. 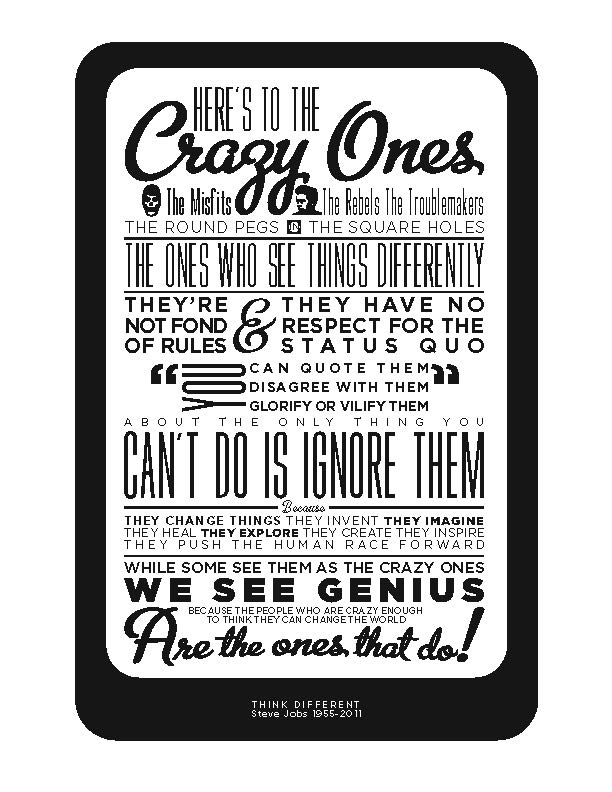 Why Crispin Porter + Bogusky is the reigning king of Hoopla (advertising)

by Next Wave Team | May 20, 2009 | Apple Advertising, Crispin Porter + Bogusky, The Craft Of Advertising, VW advertising

Crispin Porter + Bogusky is proving why they are at the top of almost every agency search consultants list. Burger King continues to have same store growth after years of failed campaigns, and changing agencies. VW was almost ready to give up on the US market, again, but have at least started to rebound sales. But what started out as an embarrassingly bad intro for Microsoft with Bill Gates and Jerry Seinfeld, and then into an “I’m a PC” has now hit pay dirt by not even talking about Microsoft’s products, but by doing a comparison between PC hardware and Apple hardware.

“Laptop Hunters” is credited with changing perception of brand value, according to a BrandIndex study:

Based on daily interviews of 5,000 people, BrandIndex found the age group gave Apple its highest rating in late winter, when it notched a value score of 70 on a scale of -100 to 100 (a score of zero means that people are giving equal amounts of positive and negative feedback about a brand). But its score began to fall shortly after and, despite brief rallies, hovers around 12.4 today.

Microsoft, on the other hand, has risen from near zero in early February to a value-perception score of 46.2.

Hefty gains in a short time, although Apple hasn’t sat idly by:

But, while this battle royal can wage for years, the real reason that Crispin Porter + Bogusky keeps winning for their clients is that they get the fundamentals right.

They know that advertising is supposed to surprise and delight, not inform and sell. They take great pains to make sure that you might actually want to talk about the ads they do around the water cooler at work the next day.

Today, they pulled one out of the hat for me. I own a copy of “Hoopla” which is their monograph. For the most part, it’s heinously designed making it almost impossible to read, but, inside the back cover- I discovered (via a tweet by Alex Bogusky) there is a secret second book:

This guy @DomineConcept discovered the hidden book that was bound inside the back cover of our book Hoopla » link to Dominé Concept | Hooplanetics and a ripped up HOOPLA book….

Which led me to carefully operate on my $50 copy: 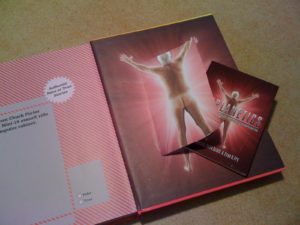 A secret book awaits inside the back cover

I’ve also been watching the CP+B Ebay auction of their interns time:

In the past, our interns have created work for companies like Burger King, Volkswagen, Guitar Hero and Microsoft. And now they can do the same for you. Bidding starts at $1 for three months of service with all proceeds going to the hardest working people we know – the CP+B interns themselves. So bid early and often, and world-class advertising can be yours for a fraction of the going rate.

It’s innovative, it’s interesting and it’s not strictly advertising. It’s a conscious effort to manipulate and shape contemporary culture, cajoling and dancing outside the boundaries of conventional advertising wisdom. Everything can be an ad if you make it interesting enough.

And that’s why they are winning awards, accounts and owning the crown of the Hoopla kings.

by Next Wave Team | May 20, 2009 | Apple Advertising, Differentiating Your Brand, The Craft Of Advertising

It’s becoming an epidemic, your competition does a “great ad” so we should “one up” them with something derivative.

And, then Ogilvy does a response ad (much later) for Lenovo:

And while this may seem funny, it’s not really building the Lenovo brand, but reminding you of who was there first.

I heard a great quote the other day, “cover bands never change the world.”

The same thought applies to advertising.

Comparison advertising. It’s been around for a long time. In days of old, it was the way to go. Choosy Mom’s choose Jif, the Pepsi Challenge, We’re number 2, so we try harder, the demos showing how Bounty was the “quicker picker upper.”

During the boom years, comparison advertising became passe among market leaders- why give credit to your competition.

Typically, it was a way to leverage a smaller brand against the leader. 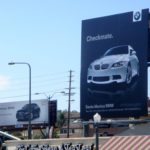 It’s a dangerous proposition. Look at the smackdown Audi gets from BMW in their billboards in Santa Monica on the right. Those who don’t study their craft are doomed to get hit twice. Honda fired Chiat/Day from their motorcycle account. Their new agency came up with “Follow the leader” to which Chiat/Day came back- now working for Yamaha with “Don’t follow anyone.”

When the economy goes bad- all bets are off. It’s time to go into the cage for a brand on brand death match.

While scrapping for every dollar might not be an option as consumers cut back, the damage it can do to a brand is real. Do you really want to be the cheapest, lowest price product when the money starts flowing again.

Chuck Porter once said at the Cincinnati Ad Club “Anyone can do a better price and product ad, all they have to do is have a lower price” so it sort of shocks me when Crispin Porter + Bogusky starts running ads for Microsoft based on price.

Where “Laptop hunters” Lisa and Jackson go to buy a laptop for under $1,500 and do a comparison between Apple and a PC.

After the drilling Apple has given Microsoft with their “Get a Mac” campaign, which has won an Effie,  and has been credited for doubling market share, Apple had to see it coming.

But, this is the kind of attention Microsoft wanted when they hired the best ad agency in the country to try to breath life back into their bankrupt Windows/Vista brand.

Crispin Porter + Bogusky is again proving that edgy, strategic advertising can get people talking about a brand differently, quickly, by pushing buttons.

They did it for anti-smoking with Truth, Mini with “Lets Motor”, the creepy King and subservient chicken for Burger King, un-pimp your auto for VW and now MSFT is getting the treatment.

[The reality is: both Apple and Microsoft will be in trouble if some 17 year old does for Linux what Blake Ross did for the Mozilla code base to create Firefox.]

When times get tough, consumers do spend more time evaluating major purchases. However, it’s not price that they look at as much as value. Giving consumers reason to talk about your brand value is only a good idea if it is really there. Look at the response to a Business Week story on the subject of the Microsoft challenge- compared to a holy war.

Maybe the best advice still comes from that old Chiat/Day ad: “Don’t follow anyone” and don’t compare. Leadership has its privileges.