We like to win awards just like everyone else, however, what comes first is “making clients more money than they pay us.”

And that means making ads that work. As in sell, or the phone ring.

The Next Wave was recently retained to properly rebuild a website that a local competitor had mauled as they promised “a digital marketing machine.”

And while it will take a few months to properly rebuild the ecommerce site, what we could do is revamp their print ads so that the phones and cash register would ring again.

The company, Microsun, makes high efficiency, high intensity lamps that are optimized for older eyes. The patented technology makes it easier for seniors to read- without using magnifying glasses or “readers.” They have been running versions of this ad for a long time- and thought that the reason it didn’t work anymore was because they’d “run it out.” 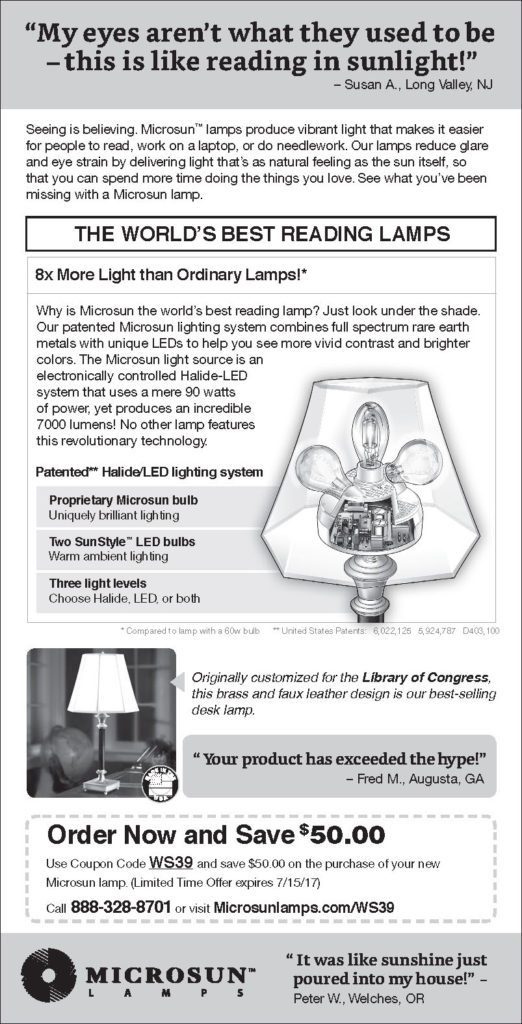 The ad that Microsun had been running.

If you were already having trouble reading, this ad wasn’t exactly the solution. Black type on grey backgrounds, Lots of small type. And, if you are reading the ad in a newspaper instead of on a tablet or online, you probably need to find a phone number before a website.

We approached the ad thinking, we’re selling a reading aid, not a lamp. We also knew that if we wanted people to read it, large text may help. The phone number is big. The images are of tools they may already be using to read the paper. 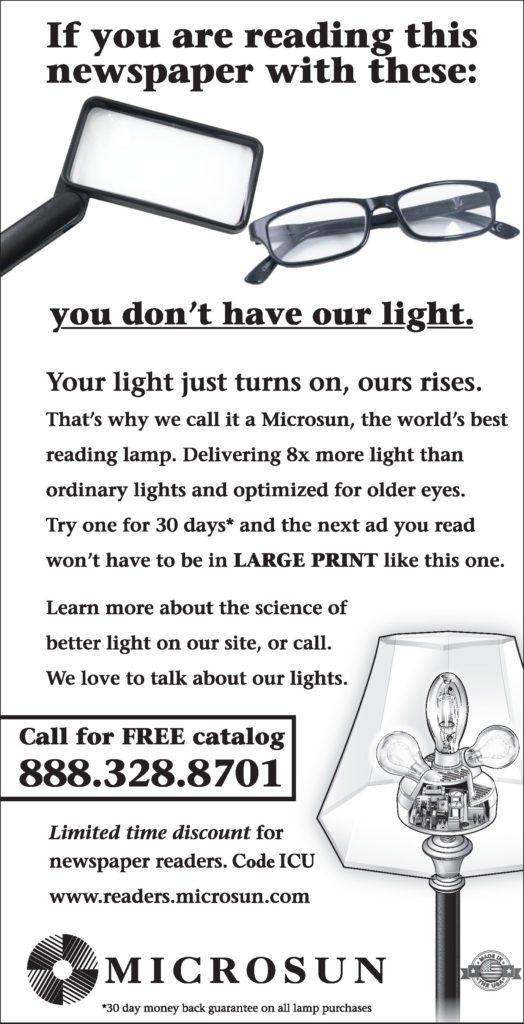 The difference in response rates were immediate and clear. A few sales came in via the site the first day, but, the phones rung off the hook with a record day for catalog requests. Large type, simplified message and the idea that we are selling a reading aid, not just a reading lamp, made all the difference. One caller said “I’ve seen your ad before, but never felt compelled to call.”

It may not win awards, but, it is setting sales records daily. What’s even more interesting to their marketing manager is that we’re integrating complete ROI tracking and marketing automation tools into their sales process so everything can be tracked and accounted for. Once the new catalog, site, and PR campaigns are fully in swing, we’ll see the best kinds of awards- bottom line growth for Microsun, the World’s best reading lamp and best reading aid out there.

He wrote the book on advertising, we built his site

by Next Wave Team | Nov 18, 2015 | Advertising Case Studies for The Next Wave, Web strategy “Hey Whipple, Squeeze This” should be required reading for everyone in advertising. We make everyone at The Next Wave read it. Of course, the fact that our Chief Creative Officer helped review and contribute to the chapter on digital in the 5th edition means it’s going to be on the reading list.

Luke Sullivan is one of superstars of Advertising who has won virtually every award there is in advertising. He now teaches at the prestigious Savannah College of Art and Design (SCAD) after working at agencies like Fallon (Where he mentored another one of our favorite people and former client Sally Hogshead), Martin, GSD&M. He’s featured in the book “The Copy Book” How 32 of the World’s Best Advertising Writers Write Their Advertising. He travels the world, getting paid big bucks to speak about how great advertising is done.

And, yes, we’re his go to guys when it comes to building a WordPress theme, organizing his content for optimal organic search, and teaching him how to do this Internet thing right (the professor is getting a C+ so far).

Yes, WordPress is powering about 25% of the world wide web these days, but, not everybody truly understands how to make it work for you. We’ve been teaching our www.websitetology.com seminar since Nov 3 2005 (we know because we have slides in the prezo still that were screen shots from the night before). It’s not enough to just have content online- it’s how you put it up, organize it, tag it, and make it useful to readers and therefore to Google. Websites also aren’t brochures, which is hard for some old school ad guys to wrap their heads around.

If you build your site correctly, it becomes a corporate information dashboard- where you can find out exactly what people are saying about you, how they found you, what they expect of you and even, why you are better than your competition.

If you are interested in how we do it, first read the book “Hey Whipple” then call us, the guys Hey Whipple used to craft his site.

Doctors spend a lot of time in school learning how to diagnose our ills. They run up big school debt. Then they are expected to start a business, usually with very little capital.

Even if they do have money- medical office marketing, as practiced by most physicians maybe one of the boringest categories of all. A picture, a name, a location and “now accepting new patients” makes up 90% of the ads. A few might say something like “specializing in smiles” or provide a laundry list of services or accreditations. Of course, comparative advertising is verboten by the medical society- because as my friend who failed the bar exam 7 times and is now driving a truck says: “what do you call the guy who graduated at the bottom of his class from Medical school? Doctor.”

So, if you do happen to have an exceptionally talented physician, who graduated near the top of his class, and you’ve known since he was just an Air Force captain working on bomb carrying model airplanes and was the kicker for the Air Force Academy, and is a really nice guy with a down home touch… and a small budget to create ads- what do you do?

Who wants to go to a doctor who is already going to bend you over- who runs an ad that looks like he has a stick in his ass before he’s even met you?

Meet Doctor Christopher Blasy, DO, who will not only be your favorite general practitioner if you live in Hinesville Ga, right outside Ft. Stewart and close to Savannah Ga. Besides giving Dr. McDreamy a run for his money- Chris will make you feel comfortable- even if he does have a rubber glove on and is coating it with KY. We had to make that come across in an ad- before he even had his formal “I’m a doctor” picture had shown in our e-mail: 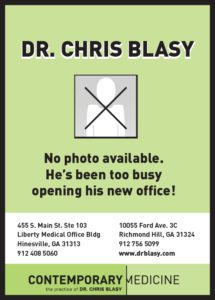 The people at the publication got the ad- and offered to insert a bad photo that they had of him- they didn’t get the ad.

When the “official looking” photo came in- with the white lab coat- a standard medical ad didn’t seem right either: 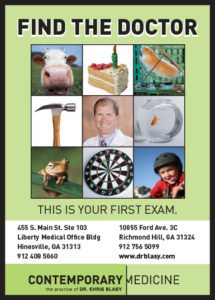 Find the Doctor. This is your first exam.

While it doesn’t exactly say “now accepting new patients” this ad also serves as a social filter- making sure that his patients have a sense of humor (science had already proven that people with a sense of humor live longer) thereby guaranteeing his patients will live longer than the competition. Good marketing can even improve your patient mortality rates- but don’t tell that to the hospitals who still like to run ads inviting sick people in for the highly risky procedures as opposed to working on preventative medicine.

There will be more ads for Dr. Blasy- but we thought we’d share some of our ideas for medical advertising to help other doctors realize your ads don’t have to be as boring as your med school text books.

You can be creative in 15 seconds

When the Dayton Bombers called and wanted a 15 second spot, all they thought that could be in there was date and time. Had they had the station do it- they would have had some news footage, with graphics on top and the same announcer that does every single local spot on the air.

The reality is, no one cares about your hockey game that doesn’t already know about it. Advertising is supposed to make people who don’t care- care. Good ads get your attention, and suck you in. Bad ads tell you about a product you could care less about.

Simple connections between client and consumer happens when you grab a fundamental truth- and make it relevant. Here we use “hockey is painful” - complete with missing teeth, black eyes, broken nose and organ music more fit for a funeral than a hockey game.

Getting the message to resonate with something the customer already believes is a great first step to engaging them in your brand. Even in 15 seconds.

by Next Wave Team | Mar 21, 2008 | Advertising Case Studies for The Next Wave, Differentiating Your Brand, Low Budget Advertising

It’s an old adage, clients get the work they deserve. Starting a relationship with an agency often takes a break in period- much like dating, where the client/agency relationship takes time to develop.

We’ve been graced with a little boutique in Dayton that wants to be Barneys New York- well, the mini-me version at least.

Barneys ad mantra is “taste, luxury, humor” and the store is known for it’s offbeat ways. The Pink Daisy hadn’t really established a brand voice when they met us through our www.websitetology.com seminar, but with a little help, they now have a new site, new business cards, new bag labels and now the first part of a new ad campaign.

They’re really happy with their site- and already have written about us:

A Big Thank you | The Pink Daisy Boutique in Oakwood Ohio
I can’t believe I finally have a website and it is all thanks to The Next Wave.

And it won’t be long before customers start sensing a new energy from the little boutique.