by Next Wave Team | Dec 17, 2007 | Ad Agenices in Dayton, OH, How To Select An Ad Agency, Public Relations in the Web 2.0 world, Search and Business, Web strategy 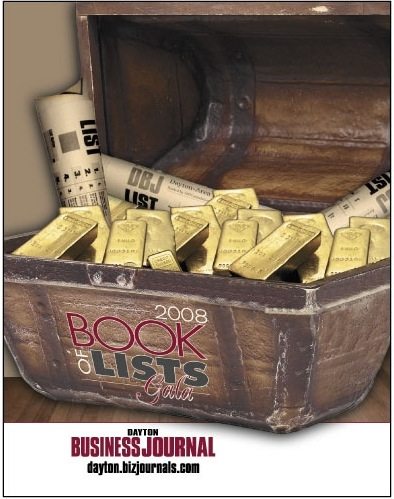 Claimed to be a “comprehensive directory of leading companies and organizations in the Dayton area” it only has 12 ad agencies listed.

Of course, they also have a party you can attend for being included- at $50 a head.

Let’s see, we have 124 ad agencies, marketing consultants and design firms listed on our Agencies that aren’t The Next Wave page, and then a good number of Columbus and Cincinnati ad agencies as well.

So if you are looking for a “comprehensive list of leading ad agencies in the Dayton Area- you’ve come to the right place. Not only is our list more complete and up-to-date, it has interactive links to the agencies so you can take a peek at the competition.

Video for fund raising events: there is a secret formula

Once a year the local runaway shelter, Daybreak, hosts a fund raising breakfast where they have table captains invite 9 people for a free meal.  Of course there’s a catch, you have to sit through a program that makes you feel warm and fuzzy about their charity cause. This year, the fifth year of using the “secret formula” for raising money- Daybreak asked The Next Wave to provide the 7 minute video for the event.

Yes, folks- it’s prescribed as 7 minutes, and you are supposed to make the audience cry 3 times. It’s near the close of the session, just before the gut-wrenching, heartfelt story of success despite the odds, and the final ask for donations.

After watching the four previous years videos, we knew one thing- we weren’t going to do anything like them: a montage of interviews, “recreations” and narration by staff. It was time for something totally different- something where you wouldn’t know what’s coming- or get caught up in the delivery of the story- just a focus on the story.

Our original idea was to draft David Chappelle to do the MC of the video- and I actually spent 20 minutes talking with him, face-to-face, and offering to pay him to help us out. The goal was to bring national attention to the shelter- and to make more kids aware that it was a positive place for them- instead of an option of last resort. Unfortunately, Mr. Chappelle isn’t reliable- so we found one of Daybreaks own to step in- Mr. Robert Neal Jr.

By placing the clients behind the screen- 60 minute anonymous interview style- we knew that our audience would focus on the story- not on the personalities, when the ending came, it would all draw together in a powerful close. We didn’t want slick production values- and the number of times we had to set up made it an even more daunting task- but the real payoff was the results- watch the video before you look to see how effective it was.

I watched the audience at the table next to me: totally riveted to the big screen, when the totals were counted:

For the first time they had a donor pledge at each of the two highest levels- $10K a year for 5 years and $5K a year for 5 years. Total donations were higher than ever before. They took the concept of the “Fairy tale” gone wrong- and built the whole morning on the theme. While sometimes we wonder if selling more widgets is truly a noble cause, the opportunity to help a great social service organization headquartered a mere 4 blocks from our office makes us proud to do what we do.

As to the secret formula- yes, the whole one hour program follows a fixed script on how to manipulate an audience into giving money. It has worked like clockwork for our client, however, this year, it worked even better.

That’s why we are The Next Wave.

The Web 2.0 marketer: where every page is a home page

We teach a seminar called Websitetology to try to educate clients on web 2.0. We also teach a fair number of other ad agencies (even the local competition) because, well, that’s the kind of people we are.

One of the things we stress is that if you aren’t on the first page of Google you don’t exist, and that content drives traffic. Build valuable content and they will come.

Unfortunately, it’s falling on mostly dead ears. Even huge advertisers like Apple, Burger King and BMW don’t seem to understand how to port their marketing to the web properly. It’s not about how your site looks, especially your “home page”- it’s about the content on every page: every page is home for someone- about something.

So- it was good to see new media bigwigs Avenue A/Razorfish do a study to confirm what we already knew- excerpts from the Ad Age article follow- with a short primer on what we know works on the web:

Garrick Schmitt was sitting in a meeting, listening to a client talk about the need to make its website “Web 2.0-compliant,” complete with tag clouds and profile pages. “Tag clouds?” thought Mr. Schmitt, VP-user experience at Avenue A/Razorfish. “Really?”…

The request seemed curious to him — do that many people really use tag clouds that a brand marketer’s website needed to incorporate them? Surprisingly, he couldn’t find the answer to that question. So he decided to find out. END_OF_DOCUMENT_TOKEN_TO_BE_REPLACED

by Next Wave Team | Aug 13, 2007 | Ad Agenices in Dayton, OH, Dayton Media Options, Everything You Want to Know About Advertising, Media

In our effort to keep up-to-date with all the options for marketers trying to reach consumers in Dayton Ohio, we keep a media options for Dayton Ohio page as up to date as possible. Today, we found yet another out-of-home option- table cards in restaurants.

Run out of Portland Oregon, The Trivia Page is a low budget laminated single sheet that sits on tables in local restaurants.

Trivia Page Photos
The Trivia Page is an entertaining laminated booklet displayed at several restaurants throughout your city. It’s displayed in a variety of high traffic eating establishments, from Delis and Coffee Shops to Steakhouses and Sushi Restaurants. The reason it’s so popular with restaurant customers is that it’s filled with trivia questions, fun facts and other interesting reading material that keep the patrons occupied while they are waiting for their food.

The price si $686 for the year, with your “Feature article appearing on at least 4 front pages.”

It’s printed quarterly, and you can reach The Trivia Pages at 800-299-4193. They are planning to roll out other areas.

by Next Wave Team | Jul 6, 2007 | Ad Agenices in Dayton, OH, Advertising Case Studies for The Next Wave, Brand Relevancy, Change the world, Differentiating Your Brand, Everything You Want to Know About Advertising, Future of advertising, How To Select An Ad Agency, Marketing & the Web, Practical Marketing 101, Search and Business, Web strategy

The old cowhand expression goes “you can lead a horse to water, but you can’t make him drink” is how advertising agencies often feel about our clients.

Coming up with the “big idea” is one thing- getting the client to buy it- can be infinitely more difficult. Sometimes, even when you have a client who thinks you are brilliant- they run into an “expert” who convinces them that their ad agency can’t possibly know how to make the web work for them- and that they should “trust” them.

This was the case with our client Zen Windows- a small business that we provided the tools to compete and win against much bigger and better capitalized business heavyweights. Our name, our tagline: Zen Windows, Relax, window quotes in five minutes, set them apart from the high-pressure, hard-sell, commissioned window sales companies in Columbus Ohio. Our simple web strategy involved using blog technology to keep Zen Windows at the top of search- for many terms- not just keywords. Unfortunately- the client drank from another cup- and so yesterday, when I saw we had gotten a google hit for “Zen Windows”- I checked to see what was generating the hit- and it was our post showcasing his logo. Considering “Zen” is the name of a hit MP3 player, and “Windows” is the leading operating system- the fact that our technology and our logo got first position in Google is a miracle. Considering that his company didn’t show up in the first 30 hits is a testimony to the snake oil salesman that told him he could build a better website for Zen Windows.

If you aren’t showing up in the first 30 results (or 3 pages) of Google for your own company name, you should be talking to an ad agency that truly understands integrated marketing communications and site construction for optimal search results (not just SEO or Search Engine Optimization- which we believe to be voodoo).

The funny thing is that the new site doesn’t look much different than the design we began with. But, the developer added Flash video to the home page. Flash, but no bang-for-the buck. You decide- what you want- snake oil- or results?

The Next Wave is marketing • innovation for a reason. 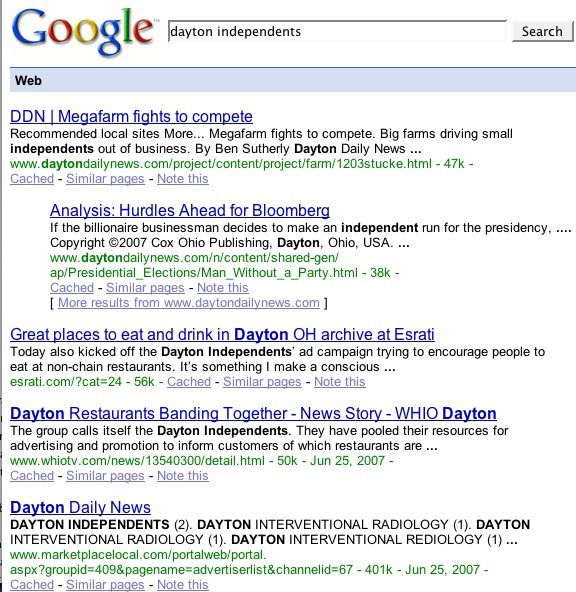 I’m not sure who the independent restaurants hired, but the site by the Dayton Daily News isn’t helping them much.

How do I know, well, people searching for “Dayton Independents” are ending up on my personal site: esrati.com which has a section on great places to eat and drink in Dayton Ohio.

This is why an agency that knows web 2.0 is critical to the success of any campaign- test your agencies adoption of this new way of doing business by going to google and typing in: site:agencyurl.tld and see how many pages come up.

Here is a snapshot of the Google results for “Dayton Independents” - note Esrati.com is number three.

It’s not enough anymore to run an ad, have a site, and expect results unless you have a modicum of Search Engine Optimization under your belt.

That’s why we teach our websitetology seminar. We even offer to teach the competition!