When advertising does right. Ad2 and Accessurf Hawaii

by Next Wave Team | Jun 8, 2007 | 2007 AAF National Convention, Advertising, Change the world, Everything You Want to Know About Advertising, Low Budget Advertising

Ad 2 is a subgroup of the AAF for young ad pros. Each club does a local public service campaign as a gift back to the community- and the winner was announced today.

When a campaign makes you teary eyed, you know it’s got something going right. The campaign from the Hawaii chapter, for Accesurfhawaii.org was one that you won’t forget.

What’s more incredible- is the total cost to the client was $0- yet the value was over a million dollars.

While the beaches are important to Hawaiians, there was a group of citizens who weren’t able to get to the beach- the disabled. AccesSurf Hawaii was a new organization that needed volunteers- and potential client awareness of their adaptive surf program. To see the effect that getting a wheelchair bound person not just out on the sand, or in the water, but actually riding the waves was inspiring.

George promised me he would get the spots up on youtube soon- and then I’ll post them here, but in the meantime- listen to these numbers- 4x the number of volunteers, 8x the number of clients to be served- basically fast forwarding the organizations plan ten years into the future.

We recently had a client who’s favorite refrain was “advertising doesn’t work”- well, this is proof that it works, that the people in advertising care about their community, and that advertising can change anyones fortune- if done right.

More from the 2007 AAF and NSAC awards

Well, the winners are the University of Minnesota, Twin Cities- and the presentation was awesome. Fluid, insightful, positive and had some great ideas: like a custom printed bottle- photo booth style, and some great online unification of the site. They even suggested less Flash, no avatars and getting a less fragmented face on the site.

It was refreshing to see a really good team, present a great concept.

I went to the judges briefing afterwards- got some more insight. I’ll post more later.

In the meantime- all the students who participated gave Coke an amazing return on their sponsorship investment- NSAC may be the best bang for a marketers buck ever.

Only one thing to be careful about- just before Minnesota gave their winning pitch, it was announced that AOL was next years client. In their presentation Minnesota gave AOL as an example of how not to try to force consumers to do things their way- which got a huge chuckle and applause from the audience. Good luck getting out of that hole for next year Minnesota.

First things first: Louisville’s ad federation has the right attitude- seems to be connected to the community, realizes the value of bringing people in from all over the country- and showing them Louisville’s best.

The hotel, didn’t look like much on the outside as I pulled up on the motorcycle after a really hot ride from Dayton- but inside- the place is grand. Really amazing main ballroom- and a lobby that makes you think back to the grand hotels of the 30’s and 40’s. It’s 2 years old- and a Marriott- only complaint I’ve heard is no wireless in the rooms (you have to use a cable and pay for access- although access is free downstairs if you type in “Public Wireless” and then give your name). Even heard the chef came out and made a custom vegetarian meal for one of the attendees- that’s customer service.

The goodie bag from AAF was OK- the one from Louisville AAF- rocked- a box of girl scout cookies, Makers Mark Burbon Chocalates (I had one and got a buzz) a t-shirt, and their club magazine “Communique” which is awesome. I happened to sit with their board at lunch- and the people were friendly and firmly believe that Louisville has a shot at becoming the next Minneapolis or Miami. It’s that kind of winners attitude that needs to come to Dayton.

Got to see three student NSAC (National Student Advertising Competition) presentations for Coke. One was great- from SCAD (the Savannah College of Art and Design)- the other two were weak. Going back to my judging of Postal Vault in the districts last year- same issues in presentation: the client doesn’t need to know who you are, what your name is- let the work, the ideas, the analysis be the star. Even if you are David Oglivy, Howard Luck Gossage and Bill Bernbach, the people who will see your ad won’t know, they’ll just like it- or hate it. With the average CMO life expectancy dropping by the day (the Macy’s CMO just left after 13 months) the only people who care about the names of people working on the account are the ones trying to use the old “no one ever got fired for buying IBM” (or any other leading brand). Face it- if your ads are working the checks keep coming- it’s only when there is a hickup do people start thinking “Oh, we need Agency XYZ working on the account.” So, students- all your school branding, titles, etc- are moot- just start out with- “I’m Jason, and here is the account planning data to justify our strategy” and move into the meat.

I’m also hating the memorized speeches that, if one person loses their lines- the others all pipe in - face it, if you want to deliver lines- don’t be in advertising, go into theater (or hire actors to deliver your pitches)- now, more than ever advertising is about having a conversation with the customer- you wouldn’t do that from a script, would you? Feel confident in your ability to deliver- ad lib- it has more authenticity and that closes deals- not a push paly and off you go type presentation.

In a forum session “Digital Innovations & Social Networking” they had to expand the room to get all the people in. Great, but, the speakers were in chairs- where anyone sitting in the back couldn’t see them, some staging would have been great. Well moderated session by Murray Gaylord of the New York Times- and by all means, moderating panels is an art- and this was better than most. The scary part was that probably half the audience had no clue what “Second Life” is- which means a lot of clubs should be adding speakers on Web 2.0 to their speakers lists asap. 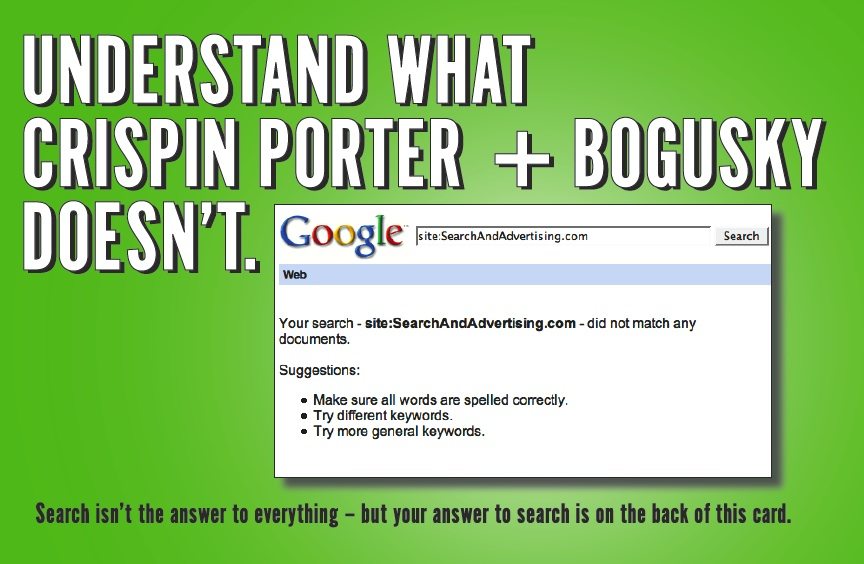 Which brings me to my last morsel of the day- I was dropping off my Understand What Crispin Porter + Bogusky doesn’t flyer (link is to a printable PDF) for club execs and schools to promote me as a speaker- and seminar presenter. Next thing you know- I’m being told to “Cease and desist” from my little guerrilla marketing effort. It’s unclear if it’s because I didn’t pay big bucks to be a sponsor, or because I said “Understand what Crispin Porter + Bogusky doesn’t” on the piece (apparently it’s ok to compare detergents in advertising- by name, but not ad agencies). This news was delivered by our club exec director who seems to feel that any kind of self promotion is evil- but, she gave me a card of an AAF executive that was the authority on this. 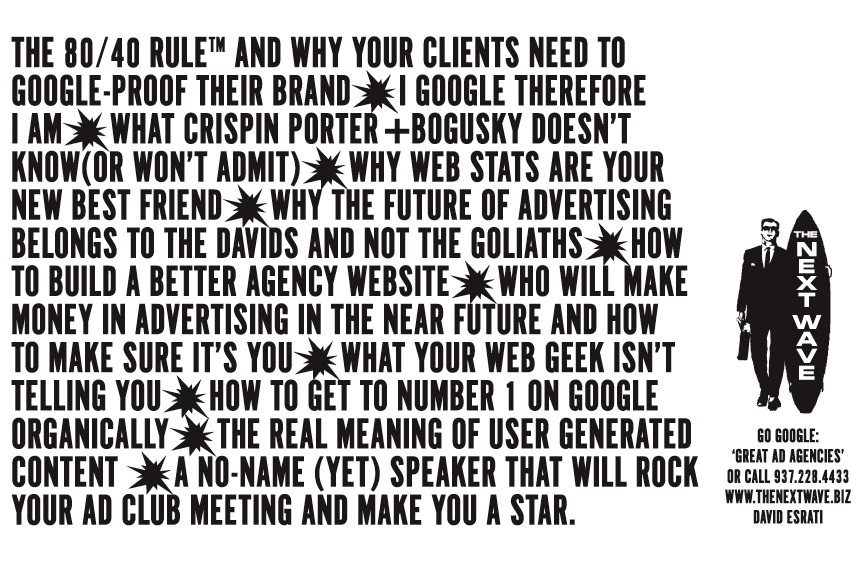 I’m almost surprised I wasn’t told to take off my Next Wave t-shirt. I’m tempted to wear my “I blogged your mom” t-shirt tomorrow- just to take the edge off these people. If you can’t have fun at a convention of ad people- what is this world coming to?

I’ll have more after Friday’s festivities. And, to any of you who are here- and have read this far- when was the last time you put some new content on your agency site?

And last but not least- If you are a student- and haven’t bought Steve Lance’s “The little blue book of advertising” yet- shame on you. It’s a classic- and well worth the $14 to have an autographed copy. Forget the mojitos- get some marketing mojo from someone who understands this new economy.