A recent reviewer of a RFP/RFQ response wrote this in the evaluation/scoring:

Plan provided is NOT a marketing plan it is a Operational plan. RFP is for Marketing not a replacement of the Administration.

People who think marketing is something separate from operations shouldn’t still be in business anymore. That myth should have gone away a long time ago.  Wisdom from Leo Burnett should be a good starting place, and he died in 1971.

Considering the potential client runs a service business, funded with tax dollars, and is getting a failing grade on every count, (a local school district) a new operational plan and way to communicate the new way of doing business is the key to changing perception and their fortunes.

Marketing does not exist in a vacuum, it’s interrelated to everything a business does. Looking to management guru Peter Drucker, who died in 2005, we find yet another quote:

If that doesn’t tell you that an operations plan is marketing, you should reexamine your boss credentials.

Everything a business does, reflects upon its brand. And the brand is a story that the world tells each other, based on what they think they know about it. Apple, Nike, Google, the great brands- have a story that people can share without a whole lot of prompting- and for the most part, it’s a positive one. Sure, each has its detractors, but overall, the Q-score and the buzz line up with the company vision and goals.

To me, Apple started out as a “bicycle for the mind”- a tool to exercise your further your ideas and to help you share them. Nike reached into the competitor in all of us, and gave us an uplifting mantra- “Just do it” and Google, knew long before the rest of us, that with great power, came great responsibility and stated that their goal was to “Do no evil.” It’s take over a decade for most people to understand the power that Google had harnessed. 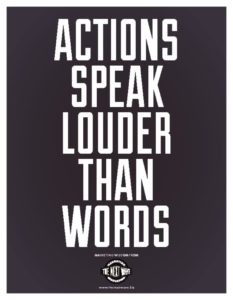 Great companies do great things and communicate those things often and consistently. But here’s the key- it’s not through words or ads- “actions speak louder than words” should be the mantra of every ad agency across the globe. Doing good is doing well. Talking about yourself is just talk, and often times, boorish.

Need an example of actions speaking louder than words? I was at a minor league hockey game last night. I’ve been around hockey for at least 50 years, playing and watching. In a freak instance, a players stick was flung into the stands, and a fan caught it. Granted, sticks can cost as much as $300 these days- but, the team had the nerve to send down a team official to take the stick back. The crowd booed for at least 5 minutes. Considering the home team was down 2 goals, the players had to wonder why they should be trying their hardest to win- when they were getting a steady raspberry. Would a marketing-centric company dare to ask for the stick back?