What business are you in?

Sometimes, the first question to ask a client is “what business are you in” and when you get the “are you stupid” response, you’ve probably asked the most important marketing question to ask.

United Airlines failed this test by forcibly removing a passenger from a flight.

Apple entered the driverless car market, while admitting they blew it when they replaced the big cheese grater style professional Mac computers that were infinitely and easily expandable with the “trash can” model.

For Netflix, this isn’t the first time to question if they understand what business they are in. When they tried to split off the disc delivery service as Quicksilver and then DVD.com they showed they didn’t get it either. Netflix is the film fanatics club- for serious movie buffs to feed their habit. From the online reviews (which were hidden), to the removal of the DVD queue from the mobile app, from cutting off access to IMDB, Netflix has consistently isolated itself from its core business- being the movie purveyor to people who love movies. Even their default autoplay of the next episode gets it wrong- their core audience watches the credits, and doesn’t want to have them cut off (this feature, can be disabled in settings after searching).

Netflix built its brand on a better suggestion algorithm, now it tossed it.

While the bigger, newer audience may just be there to binge watch episodic TV, the people who built your business are not the people you ignore.

Read that last paragraph again after each example, substituting what the core business is.

United is an airline. Scratch all the added mystique and branding of “fly the friendly skies” or trying to romance air travel, which has been turned into a very dehumanizing experience for most commercial travelers, the primary reason people fly is they need to get from point A to point B faster than driving, a bus, a train. When you sell a ticket to a paying customer, forcefully removing him from his seat, once boarded has violated every part of your basic business premise.

To add insult to injury, this wasn’t an overbooked flight even, they were removing four paying customers so a crew could fly. Fundamentally, United’s business is to transport paying customers. Any questions? 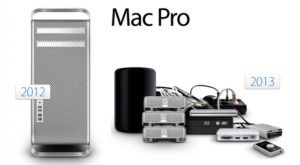 Apple is known for its ease of use in computing. It invented “desktop publishing” - which today sounds almost funny. Prior to the Macintosh and the LaserWriter, the ability for people to craft a page of print that had different sized type, photos, and print it themselves was unheard of (I know this is really hard to fathom for anyone born after 1984). They were the tool of graphic designers across the globe, the one people relied on to create everything from restaurant menus to revolutionaries handbooks. As Apple expanded the capability from print to video, the tools of the professional needed more horsepower, more options, more drive space, more memory. Apple saw things differently. Sure, the iPhone changed the world of communications, and the iPad finally made a device that could replace paper, but, the content that was viewed on these devices was crafted by the people who built Apple up- and stuck with them through some incredibly stupid moves.

And yet, the professionals are being shortchanged. The elimination of ports to be replaced by a plethora of dongles, memory and storage that can’t be replaced or upgraded, screens larger than 15″ for a portable no longer exist. Sure, Apple has changed the way they make money now- even though they fail to understand it (if Apple realized most of their profits come from app, software and content downloads, instead of device sales- they would have an answer for Chromebooks for education which are way cheaper than anything Apple tries to proffer and would have created an iPad priced to giveaway to newspaper subscribers to replace printing plants). The prices Apple charges for a terabyte drive in a MacBook Pro or a MacPro are now so insanely high, that professionals feel like they are being insulted when purchasing a new computer.

Apple doesn’t know what business it is in, at all. They are in the controlled content creation and delivery business, not a device or software business. The only thing that Apple should be worried about is putting content creation tools in the hands of the most people possible- and making it easy for them to monetize it through Apple’s secure and safe content delivery network. Cars are a distraction. Just because you can, doesn’t mean you should.

So what business are you really in? Really?