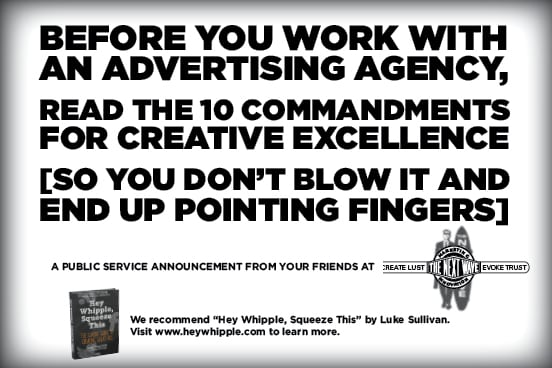 A friend gave me a copy of Dick Wasserman’s 1988 book “That’s our new ad campaign…?” and I started digging in. Wasserman approaches the book as an effort to help everyone, from the CEO to a student understand how to tell a good ad from a bad one- via a system.

Inherent in this story is a look at “how the sausage is made” and he is very clear that clients need to bring their A game to the table if they want great advertising. He cites a CEO who made a conscious effort to get better advertising.

Reuben Mark was the CEO of Colgate Palmolive- who made waves by hiring agency folks to run his marketing efforts and to manage their agencies. He was involved, but trusted his people to do the creative. He also realized that his agencies had to make money and actually raised their compensation level.

The chairman of every corporation with an ad budget would do well to make these ten commandments his guide for dealing with his ad agencies.

Much of this amounts to respect of the ad agency by the client- and an understanding that the big ideas won’t come if the foundation of the relationship isn’t solid. When you look at brands that consistently do great advertising, year in year out, you usually see a long term client/agency relationship. This has gotten harder and harder as we’ve come to believe that hiring a star “chief marketing officer” with an average tenure around 2 years, is a good way to manage marketing.

Typically, the best relationships are directly between the CEO of a company and the Chief Creative Officer of the agency. Look at the relationship between Steve Jobs of Apple and Lee Clow of TBWA\Chiat\Day, or Dan Wieden of W+K and Phil Knight of Nike. Those are the kinds of relationships that have generated some of the greatest ad campaigns and concepts of all time.

Clients who think their agency shouldn’t be bothered by being involved in something as mundane as an email blast or the design of a welcome packet- often miss the bigger picture of a clear brand voice. Jobs was fanatical about reviewing every single campaign, every package design because he knew  brand voice was critical.

When it comes to the establishing of the relationship, clear contract terms are to be assumed; what is the client getting for their retainer or contract rates. If you approach an agency asking to pay less, don’t expect more, no matter how big you are  in comparison to their other peers. A communication system, be it an online project management portal, or something like #Slack should be included in the working agreement. Not only should the means of communication be clear, but also responsibilities for responses as well.

But most importantly, if you want creative excellence, look for passion in the voices of your agency. Hire what Crispin Porter + Bogusky “ad people” well, they used to hire ad people. 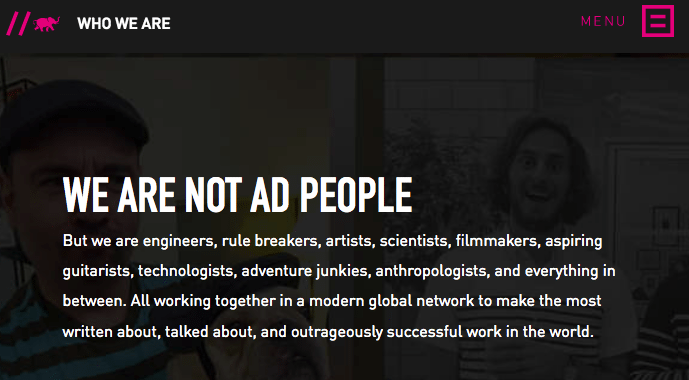 Which isn’t what they used to say in their Employee Handbook from 2004.

AD PEOPLE.
These are the weird and wonderful people who are at the core of any great agency.
Just because you work at an ad agency doesn’t make you an ad person.

They know what the trends are and they follow accounts on the move. They are emotionally involved in what they do. If youre an ad person, you have a career here. If youre not an ad person, you have a job. Whichever one you are, its worth taking the time to learn about the ad industry. Its like the old saying goes: the worst day in an ad agency beats the best day a bank ever had.

Passion is what really separates good agencies from the great ones. Just never mistake winning industry awards as passion for the craft. Awards are nice, but results should always be more important.

In what I consider the seminal book on advertising, “Hey Whipple, Squeeze This” by Luke Sullivan, he has a section where he he describes the disconnect between many clients CMO career path, vs those on the agency side- typically, one comes up through sales, and the other- comes up through- well, the creative consulting side of things. Really awesome clients ask their agency what books on advertising to read, and great agencies ask the client what they should read about their business. We have a booklist, but are really happy if our clients just read Whipple.

We have our own theory of what makes client/agency relationships create synergy: think of it more like a marriage, and not a contractual relationship. Choose your partner wisely, and realize, that gestation of a great campaign usually takes slightly longer than that of a baby. W+K wasn’t Nike’s first agency- who came up with “there is no finish line” but it was a few years after Nike moved the business to W+K when “Just do it” was introduced.

There is a learning period, and it’s not something that can be sped up. Clients who invest in teaching their agency about their business, usually get much better creative solutions. In a data driven world, this also means sharing not only web logs and analytics, but actual sales figures, customer data, and costs involved in making a sale. This is how targeting and marketing automation tools get optimized.

What may be the most overlooked aspect of the agency/client relationship however is what are the clients real objectives. Is it to get big and get bought, to maximize profits, to build the company, to be a leader in their field? While it may seem obvious, it’s not always clear to both parties and sometimes this is where the disconnect is. Steve Jobs was building “bicycles for our minds” when he launched Apple Computer.  Watch him explain how he came up with that expression, and then figure out what does success look like for your agency/client relationship?

Apple computer may have grown to be the most valuable company in the world, but, since Jobs has left the planet, Apple has also seemed to lose his idealism. Apple doesn’t seem to remember its roots of being a company that helped you evolve and move the human race forward and that’s too bad.

The final word of advice in being a great client, and getting the most out of your relationship is to hire people who believe in what you do. We won’t take vape stores or manufacturers as clients, just like we won’t take on tobacco companies. We’re also not interested in your micro or macro beer brew operation, your distillery or your gun store. It’s not because we don’t think you deserve great advertising, it’s just that we aren’t going to be passionate about working on those types of accounts.

If you found this helpful, please take a moment to add any advice you may have for being a great client. Thank you.