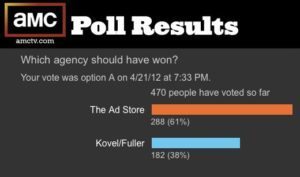 The poll picks the right agency: The Ad Store

However, the viewer poll agrees with us once again. 61% chose The Ad Store over Kovel/Fuller’s 38% to win the Frangelico account.

If you watch the online “Why they won” segment on the AMC site the Chairman/CEO of Campari America Gerry Ruvo says “we really wanted to work with the company that came with the best creative.” He then went on to say that “We thought that the Ad Store did good strategic work”. At least this time, the client explicitly said that they went with the flashier agency rather than the agency with the best strategy.

The best marketing Frangelico will get out of this show was the show itself. The problem is that the viewership is tiny, and generally the viewers don’t agree with the client choice in any episode. During this episode, Frangelico got exposure tying it in with better known products from Campari America, including SKYY vodka, Wild Turkey and the company namesake Campari.

The reality is, Frangelico is a brand needing a major makeover, not just a campaign. The brief presented here was narrow and  limiting to begin with; women aged 25-44, defined by the brand manager as “Molly.” The problem was, the brand manager was defining herself as the ideal target and trusting her judgement on what was best for the brand without listening to the strategy that the Ad Store presented. 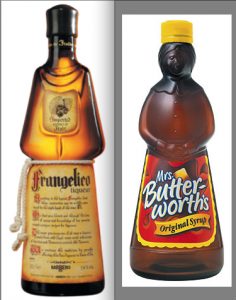 Maybe they should be married?

Maura McGinn, the “Global Head of Spirits” for Campari America proved that she was in over her head when she was impressed by the sideshow fake phone call in the presentation which she called “the little gem of a moment, when Mary presented… in the middle of the pitch, Mary pretended to call me” - really? That beat the strategic positioning of Legend, and “Think again” with it’s Renaissance reference as well as the dead on the money realization that your bottle looks like Mrs. Butterworth’s? A simple Google search proves that people were talking about this years ago, including this post from 2009)

Once again, we saw two different agency cultures and approaches. This time, Kovel/Fuller recognized The Ad Store’s Cappelli and Richard Sabean as competent competition and there was a level of respect shown for the opposition. Big egos are the norm in this business, but some are earned while others imagined. Even though many in the business cringed when Cappelli said The Ad Store was the best in the world in Episode 2,  most would agree he ate SK+G’s lunch with his brilliant “Trash Can” line and positioning. In this episode he also built a strong strategic foundation for a potentially long running campaign putting Frangelico into a class of its own. Unfortunately, the client just didn’t get it.

It was refreshing to watch The Ad Store go out and informally test and survey women in the target first with Sabean’s wife’s firm “WomanK!nd” (which will be on The Pitch in a future episode) and when Paul and his partner, Steven Crutchfield, were marketing their own products from “Villa Cappelli” in a shop.

Once again, the dramatization and the editing by Studio Lambert was designed to mislead the audience, although from a pure strategic sense we were sure The Ad Store had won, we knew when we saw smiles in the presentation of their pitch that they were doomed. If there were two things we could change about this show, one would be for a pitch consultant to help supervise and the second would be to tell the story like a documentary.

There should also be the very real option to say “no thanks to both agencies” just like in the real world, but in this case, The Ad Store was the better agency for the client once again.