AMC’s The Pitch 6 Muse vs. Bozell Predictions for JDRF the diversity episode

The upcoming episode of The Pitch features Muse Communications and Bozell as the agencies working on a pitch for client, JDRF that’s used to stand for the Juvenile Diabetes Research Foundation- but they broadened their brand to drop the Juvenile to expand their appeal- and changed their name to the meaningless initials making sure to make the brand meaningless, you can read their excuse for their poor branding on their site.

If the show had viewers, there would probably be some controversy surrounding Muse’s cpot that will appear during the episode to those that watch it over the air on AMC (that means no one watching it on iTunes like us, or on torrents, etc or over on Sky Atlantic where the Brits seem to think the show would be better with brit firms instead of those crass, craftless yanks (from various twitter comments).

The spot points out that, so far, The Pitch has been primarily white people talking to other white people. Read the video description:

As the only diverse-segment agency featured in AMCs “THE PITCH,” the men and women of Muse saw an opportunity to amplify the ongoing conversation about the need for more diversity in the advertising industry.

And here’s what we’re talking about — the excuses, the empty intentions and the quiet arrogance that allows for old white men to sit around a table with young white men and feel that everything is as it should be.

But understand this: Saying you want to do more about diversity is not the same as getting something done.

And we say to those who have the power to change the face of this industry — the time to do what’s right is always right now.

An advertising agency that is to be featured on the AMC reality competition series “The Pitch” plans to run a commercial during the episode, but not on behalf of a client.

Rather, the agency, Muse Communications, which is led by an African-American, Jo Muse, will devote the spot to a frank discussion of the subject of diversity in the ad industry.

We hope they got the space cheap, because the ratings are zip. 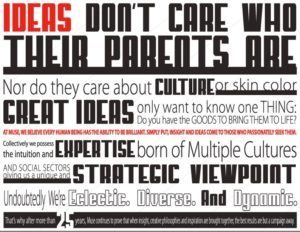 The Muse About Manifesto

It’s a bold move by Muse to stake a claim about diversity in a show where the “creative” is supposed to be king. How AMC and Studio Lambert feel about this might be interesting, but the reality is the lack of diversity in advertising is our industries dirty little secret. We’re a Service Disabled Veteran Owned Business- which is a diversity classification by the Federal Government- which “requires 3% participation” on every government contract- and yet, we’ve only had a few inquiries in over 14 years of being listed on CCR (soon to be SAM)- and oddly enough, one was from Bozell, when they were still in NYC and big. We’re also eligible for SBA HUBzone contracts- an SBA classification for businesses in “Historically Underutilized Business Zones” but it hasn’t generated a contract either.

Could the early release of this spot and the PR around it be an indication that Muse didn’t win? Trying to deflect the reason they lost? At least a few on our staff think maybe, but comparing sites gives us some other insights.

There are  differences between Culver City CA  based Muse @muse_USA and  Bozell of Omaha NE @Bozell. Reviewing their work, Muse has a handful of big-time clients. Their website features a number of big-budget commercials for clients such as Honda and Wells Fargo which feature cutting-edge special effects and camera techniques. They appear to be the larger agency, and they aren’t worried about SEO with their Flash based site. Bozell, based in Omaha now- they bought the brand after one of the major holding companies did their Moby Dick moves and swallowed a Mad Ave stalwart,  appears to have smaller clients. One of the most interesting of them is Letter-Photo, a company that lets you create custom framed sayings with sleek black and white photographs. Muse’s work is a bit more refined in execution, but they are also dealing with larger clients with larger budgets. On Twitter, Bozell has been tweeting for a while- Muse seems to have just discovered the twitterverse, not a good sign.

We’re picking Bozell as the winners. We haven’t been right yet, either in our predictions posts or when we stop the show right before “the call”- best indication of who will win is whichever agency has the problems in their presentation in the edit, sends the “rookie” in (ringer or not) or shows the client frowning or not responding.  But we don’t feel too bad; judging by the “Who Should Have Won?” Polls on AMC’s website, post-show audiences generally prefer the loser.

Here’s the teaser for the episode: