When reality hits reality TV- the case for IPTV 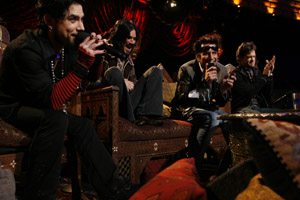 I admit it- I’m a sucker for Rockstar Supernova (and Rockstar INXS before that). Now that we’ve gotten that embarrassing part out of the way- let’s look at why it’s absolutely necessary to have your show available for download at the same time it’s being broadcast- that is if you want to keep your audience.
Last night was only the second week of the elimination program- had it been the final there might have been mayhem, because, viewers in Dayton OH and Southwest OH, had the show at first interrupted- then preempted by a tornado. WHIO-TV, Channel 7, the CBS affiliate in Dayton, in their haste to be “The Leader” had their “Newscenter 7 team” showing off their latest Doppler radar- for over 50 minutes of the show. This guaranteed that the viewers wouldn’t be able to see the performances – or vote- or be a part of the “Rockstar” community- which is what makes these shows so popular and successful.
Tonight’s elimination show will mean nothing to the viewers here- and some may not come back next week, because once disenfranchised- it’s easy to find something else that holds your interest.
If the show was available over IP- viewers who weren’t in the danger zone- wouldn’t have been lost- and or driven to something like Bit Torrent to get the content. Unfortunately, Mark Burnett productions is tied in with MSN- and the site Rockstar.msn.com is biased to Windows- an

d Windows media player- leaving us Mac users having to suffer through poor streaming video downloads- and no access to the forums (where they claim to support the latest version of Firefox- but not on the Mac). I have also just found that when using flip4mac to view WMV – that I only have access to Magni’s performance off the site- once again, a developer who ignores all 508 standards (tagging and navigation for the blind).
When this show began last year- they had a 3-episode week on Network, which quickly shifted to 2 network, 1 cable, and this year- it’s 2 network and one download. The question to ask Mr. Burnett- with running the risks of local preemption- and having to fit into the networks time slots- why not try a complete online, on demand program? Your ability to build community, individually target ad messages to your viewers- and offer interactive sales opportunities for the music, clothing, and products that are showcased on the program could be huge.
I’m sure I’m not the only viewer in Dayton that’s ticked, or the only Mac user that’s left out- but, more importantly- I’m an advertising target who just got totally missed.