The Pitch, Episode 7 WomanK!nd vs DIGO for C. Wonder review 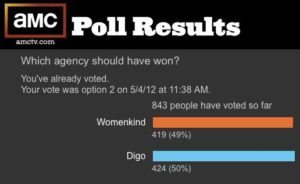 This is as close as it gets

What was billed as the battle of the sexes made for the most interesting, best balanced show so far. For the first time the AMC poll on “who should have won” numbers were close to an even split, and the amount of editing drama was minimal. We’ve come to the absolute conclusion that watching the show actually hurts your odds of picking the winning agency every time due to the editing, but that aside, this show generated some of the most interesting discussion among our team on what went right in this pitch.

The fact that both agencies were based in NYC as well as the client set the stage for what we believe is the most important part in picking an agency: client site visits. Before you ever hire an ad agency, take it upon yourself to drop in and see if it’s the kind of place you’d like to hang out, and are these the people you’d want to work with.

As stated in the show by Vicki Brakl of Womenkind, hiring an agency is a lot like a marriage. Compatibility is key for a lasting productive relationship. C. Wonder CEO Chris Burch has been through selecting an agency before and knew to do this. While the editors didn’t show us much of the visits, we’re pretty sure this was a key part of helping Burch make his decision.

Both agencies trotted out a visual feast for the pitch. Big boards from WomanK!nd (who stressed when they realized some of their boards had the period after the “C” in the client logo- unnecessarily, since when we’re watching the show the client doesn’t always have it either) with the big green doors on one side- and the concepts on the other. DIGO brought print and video and who knows what else. In this case, it wasn’t so much how much you brought- but which agency listened carefully to the brief: a single idea to raise awareness and interest for NEW customers for C. Wonder.

Despite Burch hating the DIGO tagline use of the word “mood”- the idea of a single concept as opposed to a bunch of tactical moves including in-store use of touch screens in the dressing rooms to a crm/loyalty program is what the client said won him over.

We think it probably goes a little deeper. The first strategic fail by WomanK!nd was not having the principals at the brief. This is a CEO who wants to talk to the top of the firm, mano-a-mano and DIGO made the right move sending the named partners to both meetings.

Despite running a womens fashion chain, many viewers pegged Burch as a misogynist and compared him to Donald Trump on Twitter for his direct and forward style. Of course, to New Yorkers, Burch isn’t anything out of the ordinary and both firms probably enjoyed his candid answers and felt his questioning kept them sharp and on task. What was clear was that Burch wasn’t new to the building of a brand; he had already done this for his x-wife’s business, Tory Burch. He was a veteran and while the in store tactics that Womank!nd presented might have been great and impressed viewers, this was a guy who wants to build an empire fast- and as Mark DiMassimo says after getting the brief- “We’re built for this.” DIGO has it all over their site that they want to work with brands that want to grow- and C. Wonder was a nearly perfect fit for their agency.

In our predictions post we picked DIGO to win by a wide margin- but, even after watching we were split on who would win. Both agencies could have done great work for the client, but in the end, it probably came down to the agency that sold itself best to the client got the job.

Final words by Lee Goldstein (the GO of DIGO) were that you were buying the agency and how they thought- not what they came up with in “The Pitch”- and to that, we say “Amen.”

Here’s the full podcast of our conversation: