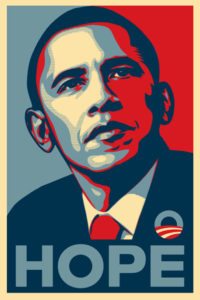 Shepard Fairey just got smacked on the hand in Boston. A $2000 fine is nothing compared to the national press this criminal proceeding brought him.

Fairey, a graduate of the prestigious Savannah College of Art and Design Rhode Island School of Design, was best known for his “Obey” campaign with the image of Andre the Giant- until he hit the big time with his Obama “HOPE” poster which may go down as one of the earliest iconic pieces of art from this century.

Before having a sponsored show in Boston, Shepard did what he does- and did some wild postings. That means putting up posters with wheat paste in places where he didn’t have permission.

One persons art, is anothers eyesore.  This piece from the Boston Globe sums up the outcome of this high profile case:

Shepard Fairey, the street artist who for decades has plastered his stickers and posters on buildings and street signs, yesterday agreed to stop leaving his mark in Boston.

Fairey, who once told the Globe he had been arrested 14 times for tagging, apologized to the city and pleaded guilty to three vandalism charges.

“People should be responsible about sharing their art,’’ Fairey said after agreeing to the plea deal in Boston Municipal Court. “That is not a transition or an evolution in my philosophy.’’

Fairey said that now that he is an established artist - an ongoing show at the Institute of Contemporary Art has drawn 100,000 visitors - he does not need to tag like he did when he began his career.

“Fortunately, I am in a place in my career where I can get sanctioned places,’’ he said. “So, it’s not an issue I will ever have to worry about again. . . . There should be more public outlets for art.’’

via Fairey pleads guilty to vandalism charges - The Boston Globe.

It’s nice that Shepard thinks there should be more public outlets for art- in NYC construction barricades have long been places for posters. Other cities have created legal graffiti areas. However, there is a distinction between permanent paint and posters with wheat paste- I’d much rather deal with the wheat paste than spray paint. This doesn’t give anyone the right to place posters, ads, or tags anywhere they want.

Microsoft tried to cover NYC with static cling decals- and got caught. Is chalk on sidewalks OK for advertising? That too is up for discussion.

As we assault the public with non-stop advertising messages, the realm of outdoor ads is just too lucrative to ignore: they can’t be ignored, tuned out, skipped past. However, legal outdoor like billboards, vehicle wraps, mall signs are expensive when compared to the guerrilla style postings that got Fairey in front of the judge. For a $2,000 fine and a lot of publicity- Fairey came out ahead.

For the rest of us, it’s a warning. Future cases won’t be so easy or cheap.

The advertising industry has powerful lobbyists protecting billboards and other big media. The Next Wave believes that the industry needs to make a case for different access to local affordable outdoor- like bus shelters, legal posting areas- for local businesses as a part of making place and local wayfinding. Small business makes this country run- and yet, when trying to compete for space with powerhouses like Procter & Gamble, the little guy often gets squeezed out.

Shepard can afford to pay the fine these days. As he says- he now has access to galleries. Were all those arrests and court cases worth it? Obviously.