Your interface is your product 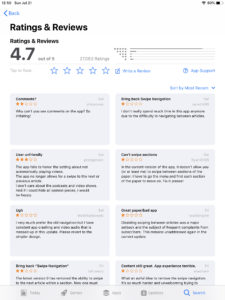 Change the interface, change your rating.

The New York Times is a very good newspaper and for a long time, it’s digital product was outstanding. Then someone had the brilliant idea to change the way millions of readers had to navigate the news. Gone was swipe between stories or sections. Immediately, the app started to get 1 star ratings.

Apple carved out their niche from Microsoft early on by offering a consistent, easy to use graphical user interface. Every application behaved the same way for most functions. Command S always meant “Save” Command P was “Print” and they had “Save As” for making a duplicate version- that you could rename- until some genius thought this wasn’t needed since they’d added versions. As someone who uses documents as templates a lot- “save as” was a lot easier than “duplicate” then “rename” and then “Move to” but, alas, someone had a better idea.

Voice command is the big new thing. Talking to machines to get them to do things is all the rage, so imagine my confusion when all of a sudden my Google “Smart device” stopped shutting off the music when I said “OK Google, Off” and started saying “I’m sorry, this device doesn’t have power management tools.”

There are lots of examples of companies trying to retrain customers that may prove fatal in the long run. Apple can’t seem to understand that the new iPhones may be the fastest ever, with the longest battery life and the best cameras but, apparently either price, size or maybe the missing big button at the bottom may be changes that customers aren’t ready to accept.

When you train your customer to do things a certain way, make sure you have a very good reason before you change things, and that your customer knows why.

If there is one thing about business in the day of the internet, your competitors and their alternatives are only a google search away. Think through interface changes as carefully as you change prices, distribution, packaging, suppliers and materials. Because your product may now be your interface.