The Next Wave goes to see the next wave in Advertising: The Ohio University ad clubs winning AOL presentation

One of the things that separates great ad agencies from the rest, is that they are made up of “ad people” instead of “people in advertising.” True ad people, take their Friday afternoon off to go see the students who won the American Advertising Federation 2008 winners of the National Student Advertising Competition instead of drinking beer or heading home. 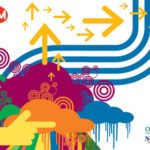 The Next Wave was the only ad agency in attendance today when the Greater Dayton Advertising Association invited the 2008 Ohio University team who won our District- and then the national competition with their strategy on marketing AOL Instant Messenger or AIM. From the AAF site is this description of the competition:

the students conducted primary research to study AOL’s target market, including media habits and competitors. The team from Ohio University focused their initial research on how adults ages 18–24 use the AOL Instant Messenger service and its competing social networking Web sites. From there, they were able to determine their objectives and strategies to ultimately design a campaign with the goal of increasing usage by 15 percent. The overall creative strategy for Ohio University’s campaign was to add tabs to the currently existing AOL buddy list. Each tab would link directly to a different Web site, representing the new facets they wanted to add to enhance AOL’s social media capabilities, i.e. a social networking site, music, etc.

The team did some of the same things that The Next Wave does for their clients: coming up with new products or services that enhance the customer experience. Their implementation of a flexible tab bar to the familiar AIM buddy list, not only added functionality to the software service, in became a key part of the campaign tagline of “Keep your tab on _______________”

The integration between their product differentiation, their media plan and the execution strategy was well thought out and reasonable to implement, although the budget that AOL set at $25 million actually gave them too much cash to work with (considering Leo Burnett relaunched Altoids with less than half that amount).

The one thing that creeps me out about these team presentations, that I wish the NASC would stop encouraging- is the style of alternating sentences by team members into one complete canned monologue. I’ve written about this before from when I judged the district 3 year ago. If there are real agencies that do this- as opposed to allowing each expert from an agency present their part of the pitch individually, I’ll eat my kneaded eraser. Some schools even put theater majors up to present- thinking this is some kind of performance instead of a serious business presentation.

There is a complete press release by OU online which includes a informal video of the winning team discussing the process of getting this presentation together. OU were the finalists that were doing this from their club- not as a capstone course, which says even more about the strength of their concepts. Also, it means that the core presenters were all Juniors or below, leaving them room for a return visit next year. The team presenters were: Ryan Dease, Victor Rasgaitis, Liz Follet, Lauren Miller, and Katelyn Mooney. And although they forgot to bring their planbook, which counts as more of their score than the presentation in competition, their advisor, Professor Craig Davis promised he would e-mail me a PDF (thanks in advance Craig). Hopefully, he’ll allow me to publish it here too.

We took our entire office to this free event at the School of Advertising Art in Kettering, where the OU team had presented to the SAA students earlier. It’s too bad that no local school has entered the competition in past years, maybe this year will see a team from SAA. And while The Next Wave was the only agency there in strength today (only about 5 other firms were represented at all from Dayton) which is one of the reasons we believe we are an agency of ad people, not just people in advertising.