Don't do this at home: Netflix kills its brand

Netflix meant movies. Before internet streaming was a reality, Netflix delivered movies to your home, with no late fees, no hassles and they had the library that no one else had. They killed Blockbuster. They killed the corner video store. They were the king of the movies at home business- and their stock price showed it.

Along with Amazon and Apple and Google and even OKcupid- Netflix had built the most incredible profile of their customers needs, wants and desires. They were trusted to recommend movies- and their recommendations were great. They were the site for the movie lover.

First error was eliminating user generated content on the site. All the debates about movies- all the amateur reviewers- all got booted. This should have been the warning sign that the people in charge cared more about moola than movies.

Then came the price hikes. Not only were they big- they also started charging premiums for Blu-ray. But, we all know that the post office is going bankrupt because of companies like Netflix taking advantage of their horrible pricing structure. 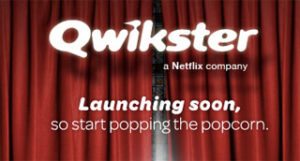 Now the doozie- forget the idea of being your one stop for film, Netflix is going to split into two units: a streaming service that gets to hold onto the brand “Netflix” and the delivery of DVD service that becomes- get this “Qwikster” (not to be confused with a ton of other similar brands). Yep, the movie lover has to split their account between two services: a streaming- the one where you can watch whatever strikes your fancy when the disk you have isn’t quite right- or in transit, or the library that has everything.

The reality is the streaming service can be offered by anyone- including the studios. Netflix was recently dealt a huge blow when Starz pulled their library. Amazon, Apple, Hulu all can do the exact same thing. Where is the differentiation of Netflix?

The DVD library brand- Qwikster- gets the red envelope. A brand new brand- that does the same thing as before. Where is the value there?

The responses from consumers, the people who own the brand (because companies that think they still own their own brands are idiots) have voted this split down and ranted against it. The stock price has been tumbling. A bigger disaster than New Coke? Or “Herb the nerd” in the making?

Or is it just brand suicide?

If there is one lesson to be learned from this move- is that you may not be in the business you think you are in. Netflix believes they are in the movie delivery business- when in fact, they were in the ultimate movie store clerk who could hook you up with the perfect movie every night. Unfortunately- someone just fired the clerk.

You can watch the CEO of Netflix introducing the new service- fail: