When you should and shouldn’t be spending money on advertising 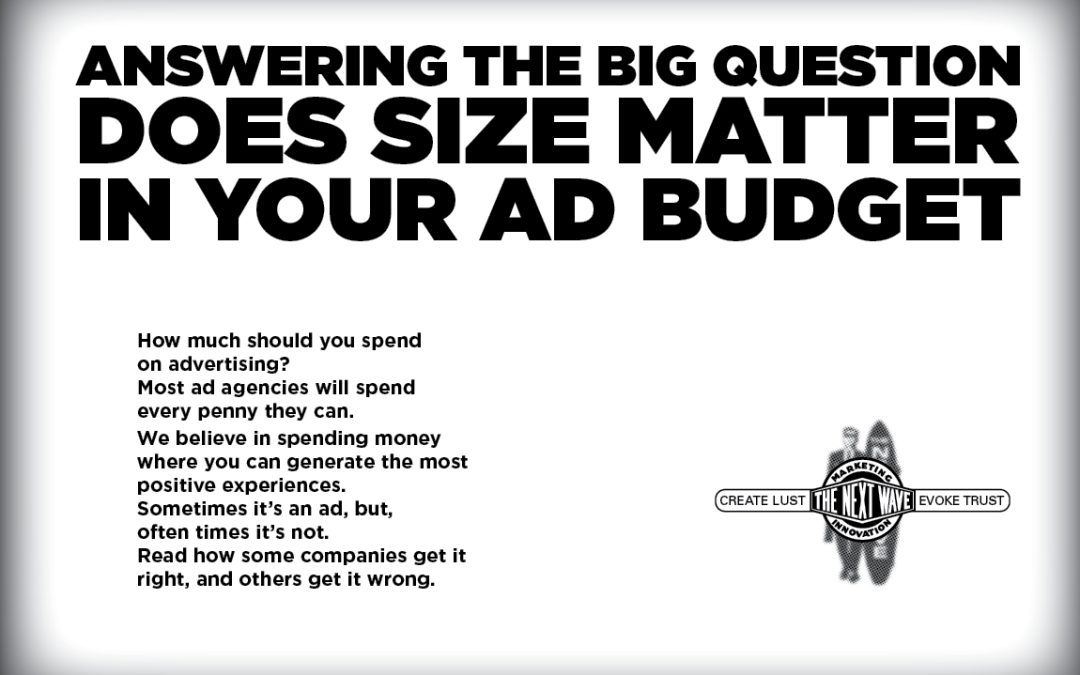 Great advertising can do amazing things for a company. The size of the ad spend has nothing to do with results if you understand this. In fact, if you have to spend millions to get the word out, you are probably putting your budget in the wrong place.

While we are an ad agency, our name is The Next Wave Marketing Innovation for good reason. Marketing encompasses the entire brand strategy to connect with customers, and advertising is only a small part of that. Innovation is making you different from your competition, a better mousetrap so to speak. Because we’re students of the craft of advertising, we can pull stories and ads that showcase when Marketing Innovation triumphs over big ad budgets to help illustrate this point. Because we’re also consumers, we can share experiences where companies don’t have a clue on how to keep customers happy- which will undo all hard earned brand equity in seconds.

There is the old adage that a happy customer will tell 3 people, an unhappy one will tell hundreds? That’s kind of changed with the advent of the internet, everyone can tell everyone anything- even if it’s not true. That’s why from the beginning of the rise of Google as the database of human intentions, the algorithm scored results by credibility, which was built by links from those with more links (hopefully from credible sources). So, every customer interaction counts, every response by your customer service people is a test, how you treat your customers is more important than what you advertise. Actions, speak louder than words.

To start off with a positive example, Mike Dubin had an innovative idea- to become “the netflix of razor blades” when he started Dollar Shave Club in 2012. A single, low budget TV spot, that he starred in, went viral. Overnight, Dollar Shave Club was overwhelmed with orders and when he sold out to Unilever in less than a decade for a billion dollars, he was still laughing all the way to the bank. The ad was brilliant, the products passable, and the customer service exemplary (once they got over the initial slam of viral popularity).

Sometimes an ad agency can come up with brilliant ideas for their client to build a buzz. Between 2000 and 2010 Alex Bogusky and his renegade firm out of Miami did it over and over. But, the most noted campaign ideas were for Burger King, a client that had a history of switching agencies every 2 years before going a whole 7 with CP+B. For a case study on their successes see our “Bogusky Freakout” site post on their milestones. They generated more buzz worthy campaigns than any agency known to man, but, when it came right down to the true marketing problem for Burger King- service, cleanliness and consistency, BK could never compete with McDonald’s or even Chic-fil-a. One of our first hires was a customer service evangelist of epic proportions who beat this into our culture at The Next Wave. She went on to a career that took her all over the globe with Starbucks and now as VP of Operations at Shake Shack. You build businesses through positive customer touches- not just sales. It’s “My Pleasure” did more for Chic-fil-a than the cows campaign telling you to “eat mor chickn.”

It doesn’t matter what your business is, you are being measured every time a customer interacts with your brand- from watching an ad, to visiting your site, to mentions on social media to seeing trash with your logo on it. So, when an existing customer contacts you, this is your chance to shine.

Florida Tile makes ceramic tile. It’s a commodity. Most people looking at a wall of tile have no idea what brand of tile it is, it doesn’t have your brand on it, and when they go to the tile store, more than likely, they don’t have a preference for your brand over another- even if they saw an ad with Florida Tile in it. Unless the tile style isn’t like any other on the market (innovation) the tile ad you spent so much money on, could actually prompt them into a store, where they buy a competitors product. Not so when you have an existing customer calling for replacement for their shower tile cove base- that customer wants Florida Tile- to match their bath. This is the moment where your brand has an opportunity to shine. Unfortunately, Florida Tile failed miserably in helping me locate a piece of plain white cove base to match my 30 year old shower install. Last I checked square white tile is always in style, but, their unique size 4.125″ square, their white- and their cove curve- is now going for $15 a piece if someone has it on Ebay (they don’t right now).

Let’s contrast that with Lego, the children’s toy with millions of little unique pieces. A call to Lego gets a totally different response from a company that has decided that making customers happy is their most important marketing tool.

“We have something that we call freaky,” Lütke-Daldrup told me. “Freaky stands for FRKE, which is short for

And those four words are something we’ve built our customer service on for probably more than 15 years.”

It isn’t just that Lego Group believes strongly in each of those four words. The reason the company is able to consistently delight customers, even when they’re having a bad day because they just opened a new Lego set to discover it is missing pieces, is that the company keeps these words in balance.

Hannah Quill, the company’s head of writing and tone of voice (which, by the way, is an amazing job title that alone tells you what the company thinks about engaging with customers) explains it this way: “One of the reasons that it works so well is that, yes, it’s fun and engaging, and we encourage people to be creative and have fun when they’re writing, but it’s also reliable and knowledgeable. It’s very important that you’re giving the customer the correct information, and that any promise that you’re making, you are committing to deliver that customer service. Freaky doesn’t solely mean fun and engaging, it also means following through, reliable, customer service.”

The proof is in the results. For example, the company’s net promoter score (NPS), a measure of customer loyalty and satisfaction, is 77 — one of the highest of any company. That means that being good to your customers is good for business. That should be obvious, but sadly, it too often isn’t.

“It’s essential that no matter the inquiry, the team provides the best possible answer and service while also reflecting our core values — and in doing that, they play a very important part to how people feel about our brand,” Christiansen says.

Source: Lego Customers Lose Millions of Pieces a Year. The Company’s 4-Word Response Is the Best I’ve Ever Seen | Inc.com

While Net Promoter Scores are nice metrics, they can only really be calculated for mega-brands, not necessarily small business. But, rest assured, the echo chamber of social media, where unhappy customers tell their friends about how crappy your service was, or how great you are, will have real bottom line results. Lego isn’t a huge advertising power in the toy space, however they have a product that has no direct competition- like the Burger giants, or lodging options.

AirBnB is a category disrupter in the lodging space. Hotels, resorts, destinations are now competing with individual “Hosts” who have a technology to level the playing field. I’m an AirBnB superhost and until recently- an evangelist to other hosts. Now, any recommendations to host come with a caveat- the brands vaunted “AirCover” host insurance plan with up to $1M in coverage, isn’t insurance at all, it’s marketing babble and a hoax. I had a guest who needed a place for 4 days while they were waiting for their new house to be ready. Turns out- the new house wasn’t for the guest- but for his friends- at which point I should have kicked them out- but the family was polite- and they were African- and I didn’t want to be caught in the middle of being called a racist. When they left- late, the house was more messy than normal. They also had more people in and out than the 1 bedroom cottage was built for. They cooked extensively- which is a rarity among my guests who stay less than a week.

About 8 weeks later a guest tried to turn on the oven. The knob just spun. It had been jerryrigged in place with superglue and paper wadding. I filed a claim for the $400 for parts and labor to replace the control and order new knobs. Airbnb told me I had to blame a guest- and had to do it within 2 weeks. This isn’t insurance, this is a guest blaming service. Had the guests just told me they’d broken it- it probably would have been covered, or at least the problem would be between AirBnB and them. Now, according to AirBnB it’s all my problem. Yet, here they are spending millions to attract new hosts to the platform.

Word to the wise, take care of your stakeholder partners first, advertise second. The cost of reimbursing a superhost for minor repairs is way less than the revenue you earn from their being on the platform.

I reached out to support twice and was rebuffed. I reached out on Twitter- and was ignored. Maybe this post will wake them up. Next up, a video, that could go viral, about the failings of their “AirCover” false advertising- oh wait- here’s Nightline with 8M views. Your ad on Youtube only has 52K views.

Size of the claim is irrelevant to the promise of coverage, it’s how you treat your partner. No matter how much you advertise, word of mouth will negate your expensive commercial message.

If you are trying to decide on how much to budget on your advertising each year, the first thing to do is to go out and look at your customer reviews. Make sure you’re delivering happiness first, then, work on delivering a message.

If you need help delivering marketing innovation for your brand, you’re in the right place. We help our clients create lust and evoke trust, the keys to happy customers.