On the front page of our site it asks why are you here? Either to do great advertising and make a lot of money, or, because you work for the competition and want to figure out how we do it.

The funny thing is, we’ll tell you how to do it, but most of you will still fail. Because, we’ll make you uncomfortable. You’ll ask, “has anyone done this before” or “show us a case study” to somehow soothe your rankled idea of what works. And by the time you are able to rationalize, to knit pick, to quiet that little demon on your shoulder saying “are you willing to bet your career on this idea”- that idea has sailed. It’s done. It’s too late.

Lee Clow has disrupted the ad world and done some of the most iconic advertising ever. He’s also failed spectacularly- but, after bringing Apple back from near death to be one of the most valuable companies on the planet- maybe, you can trust him just a bit. At TBWA\Chiat\Day they call that discomfort “Disruption” and here’s their little manifesto:

People couldn’t stop complaining about the tagline “Think Different” for not being grammatically correct, while they showed a whole rogues gallery of people who were told that they were trying to do the impossible. They made those people, or the idea of rising to their level, to be associated with Apple. Never mind that Mohamed Ali, Mahatma Gandhi, Picasso, Einstein never touched an Apple product on their rise to fame.

That this video isn’t on an Apple official YouTube channel is proof that even with the best advertising agency and smart people, some companies still don’t get how to do this right.

So when CP+B suggested to Domino’s to tell the world their pizza sucked- and that they were going to change it with “Pizza Turnaround”- was the only reason they allowed it- because Domino’s were either at rock bottom- or the people selling the idea rock stars? You decide.

The crazy part is everyone thinks they know the secret to great advertising, because they can identify it when they see it, but, even when they see it- sometimes, they still don’t understand it. Ryan Reynolds isn’t an ad guy- but his Superbowl worthy ad for Match.com is great advertising- even if it breaks all the supposed taboo’s of dating site ads- suggesting you may end up with a sociopath for a date- or worse- Satan.

If it makes you uncomfortable, it’s probably going to make you remember it, share it, think about it, have some kind of emotional response. If it’s just funny, snarky, or cute- it probably doesn’t have a real basis to convert thoughts into an action. The real question is if Match knows how to make this more than a one hit wonder- will it keep doing what it’s supposed to do- after the 2020 dumpster fire is over?

The true skill in advertising is finding an insight, a universal truth, a way to connect your product or service to something the customer already believes, or knows, and wants more of- and getting the client to trust your skills enough to be brave, to disrupt, to evoke trust and create lust. To do this- you start with truth. It’s authenticity that’s the currency, not the size of your budget.

On the last day of 2020 I sat down with my favorite former intern, who left us to get a masters at BIC, and went to work in a NYC agency. He was a bit disillusioned with the business- because so many people are too timid to greenlight work that will work. And that’s a part of the business too. You come up with great ideas- and then the client kills them. Over and over. He was in the first meeting we had with the following client- there’s a funny story that had us both wondering if we were going to get shot on the spot to the answer I gave to a question, but, that’s a story for another time. Instead, the client tortured a big idea to a slow death soon after we started on the account.

At the beginning of 2016 we had a client who made a light that was optimized for old people who loved to read- and we had a new president who was elderly and proud of his not-reading. We quickly put together an ad for the Washington Post- that the president supposedly did read. 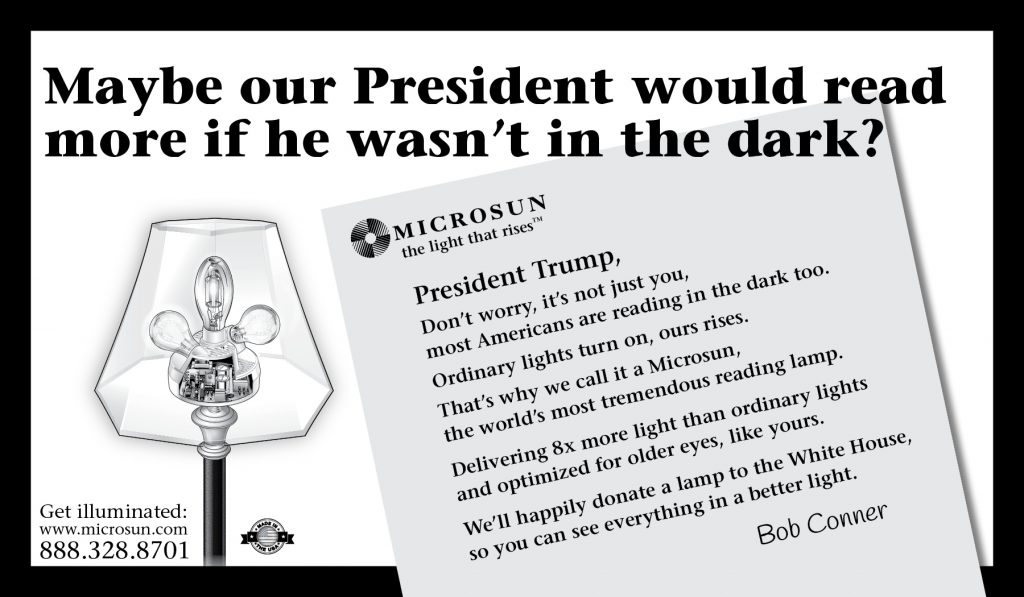 To the brave, can go the spoils. Unless you pick it apart

By the time, 4 months later, the client was done picking it apart and re-writing it, Trump had started to perfect his “Squirrel!” strategy of distracting people daily. The days to contemplate the idea of actually reading his daily brief was long gone- and the client stripped out the address line. And, then, it only ran once, as a remaining space ad. C’est la vie. BTW- the “Get illuminated” line was contributed by the one and only Alex Bogusky. Yes, I ran it past the Creative Director of the Decade for suggestions and he liked it. 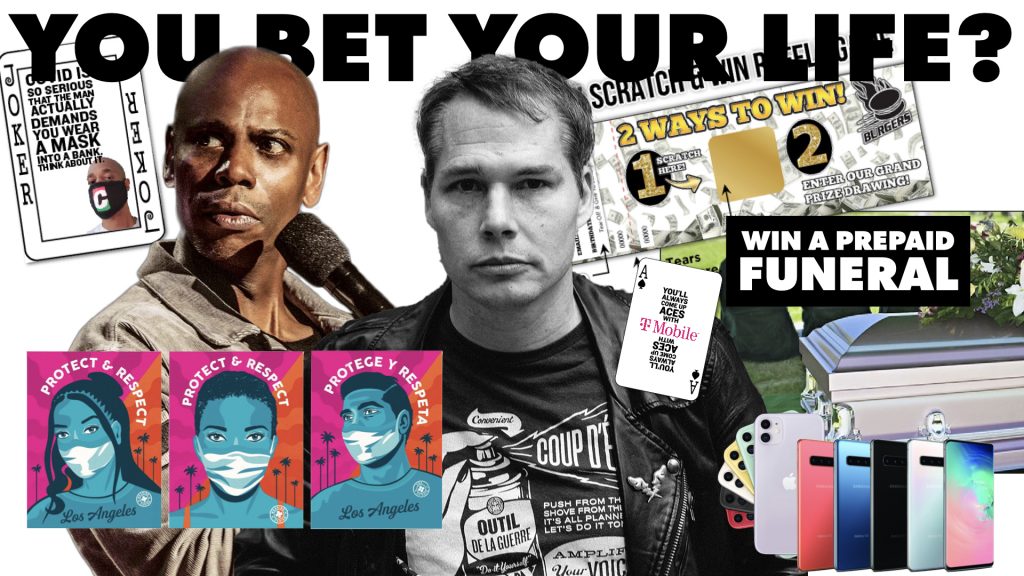 Just before the second spike of Covid in the fall of 2020- we responded to a public health RFP to reach out to minority communities to get them to be smart about Covid- to warn them of the dangers of not wearing a mask, not washing your hands, not gathering. It had a fixed budget. The RFP was written by people who had no idea of how to write a brief or an RFP (see this post). They asked for the moon- on a shoestring budget. As part of our activism, we’d uncovered them as crooks 6 months before- handing out a no-bid contract for even more money to the agency that would do a county officials political campaign. Needless to say- we knew we wouldn’t get the contract- but, with good ideas and good connections- we decided to pitch them the moon. We came in dead last on the score sheet. Why? Maybe because we’d embarrassed them- or maybe because they have no idea or tolerance for a great idea. Here it is:

Idea: Groucho Marx used to host TV show- You Bet Your Life. We will have Dave Chappelle talking to people about betting their life on Covid- in a very Dave way.

Action: We’ll have scratch off lottery like tickets to win in a sweepstakes. The scratch offs will be distributed in gas stations, corner stores, minority businesses, churches. They will be supported by a poster by Shepard Fairey and Studio No 1.If you don’t think you know Shepards work- you missed the whole Obama Hope and Change poster thing.

First round prizes- 1 in 4 chance is to win a deck of washable playing cards. 56 chances to share messaging- and lots of room for sponsorship. You can play solitaire with yourself- and take no chances- or you can play cards with friends and engage in risky behavior.

By filling out an online form- and allowing us to continue to message you via text or email- you can register to win a top of the line phone and service for a year- from T-Mobile who was signed on to sponsor. 10 prizes available

To get pastors into the act- they were to do short video sermons against gambling- either *wink* lotteries and scratch off- or with the virus. The top ten in shares and views would be randomly eligible to win a complete video streaming system.

And- the grand prize- sponsored by a local funeral home- for if you gamble and lose, a complete pre-paid funeral. Because if you bet your life with Covid- you stand the chance of needing one.

The last part- well, it made the “evaluators” nervous. Talk about death, oh, no. As if it’s not something everyone will face?

We pitched it to the State as well. The former newspaper reporter who runs public health communications, and knows nothing about advertising said “At first glance, I don’t think it strikes the right tone that we are trying to convey.”

And there you have the death of a big idea that would have made a difference.

A US Army recruiting campaign- for your mom and dad

Here’s one more. The US Army is a huge marketeer, it’s hard to get people to sign up to risk dying for their country. The account, worth $4B over 10 years recently went to DDB. They had some brilliant insight in their pitch to the Army and their new tagline, “Tomorrow takes an Army” was a huge departure from the gung-ho video gamer campaign the Army was running- “Warriors Wanted.” As a former soldier and disabled veteran, I understand the dilemma of teens on deciding to join the service- and their expectations, better than most people in advertising (very few minorities and very few veterans in the field). Unable to get in at the last agency or current one- we went to Ft. Knox in November of 2019 to pitch our idea based on a key piece of insight: a higher percentage of recruits come from families that have veterans in them.

We pitched a reality TV show called “Back to Basic” where old veterans went back through basic training to finally dispel the eternal myth of “It was harder back in the day” and compare the experiences- and the wisdom gained by serving. We had hoped to get parents with their kids at the same time. We had the perfect host- a celebrity MMA star who had served- and we knew it would do blockbuster ratings.

The Army rejected us- saying “We’ve done reality TV” and it didn’t work. Hate to tell you, Mark Burnett has done a lot of reality tv- and some has worked out just fine, others have bombed, but that doesn’t stop him from continuing to try.

Well, last month we found the vindication for our pitch. AARP posted a video about a 59 year old veteran who had to go back through basic training so he could serve with his kid. In less than a month it had 750K views, it’s at 847,411  in 50 days. That far exceeds the views, shares and discussion of anything the Army is producing right now.

If an idea doesn’t make you uncomfortable, it’s probably not big enough.