“The Pitch” on AMC is not a show for people in the ad business. It’s bad enough that clients still think it’s ok to ask us for speculative “spec” work- without compensation, but now we’re making a show about this ridiculous process and the clients invariably picks the shop that doesn’t do the best work. Which is exactly where we are once again in episode 4 for Pop Chips- a company that already has put celebrities and bad taste in campaigns ahead of trying to differentiate their product and build awareness.

Instead of asking for a guerrilla campaign that will encourage social media buzz and Word of Mouth- they came right out with “We want a viral campaign.” Choke. Yeah, because everyone who produces a video knows that it’s going to go viral? That’s why KONY2012 servers were crashing left and right. That’s why “Dollar Shave Club” wasn’t able to meet the shipping schedules almost straight off the bat when their video went viral.

Contender one in this battle is Boone Oakley who have created more than a few viral events and even their own youtube website which had it’s 15 seconds of fame. They seemed to know that you don’t create viral, you create an opportunity for viral to happen. As they tried to solve this problem, they came up with all kinds of things that would give Pop Chips a chance at going viral, or at least, to grow their likeability. The campaign “Make Life Pop” works on more than one level. It talks about their technology (who knew you could pop a potato?) but also about how we can have fun with our product. It had legs. It had a whole world of places they could bring the brand to the public and make it interesting and fun. Boone Oakley should have won this presentation hands down. They were the right people with the right platform. The only thing they missed was someone who could calmly tell the Pop Chips people how this all works- or doesn’t work. That person was probably their account strategist Greg Johnson who used to work for Nike. Unfortunately, Greg was getting his gall bladder yanked out about the time they were making their pitch. Greg might have been the perfect guy to set Pop Chips straight on the need to also include their health benefits in the strategy- because the whole point of Pop Chips is that they aren’t fried- which is unhealthy or baked and inedible. Maybe if Greg had been eating Pop Chips- he’d still have had his gall bladder.

But, that doesn’t seem to be on the Pop Chip’s peoples radar. They like to make noise without substance. They did their Ashton Kucher thing already (see our predictions post).

Then we have “Conversation” – the upstart underdog sweat shop run by a guy who heard “viral video” and was done thinking that night. No creative strategy, no brainstorming, no research, Frank O’Brien had it stuck in his head that the answer was the “world record viral video”- of course, this show was produced before KONY2012 was released, so Frank had no idea that he’d have to top 75 million views of a half hour video in two weeks. Sorry Frank- your “concept” was as lame as the assignment.  The team struggled to put lipstick on the pig and came up with “The Year of Pop” to wrap up Frank’s loose ends- and then went and built a shiny new toy for Pop Chips- a website, a mobile app and, oh, btw, be prepared to buy TV, Radio and Outdoor to get your “viral campaign” to work. Ouch. And, how much was this all going to cost? We don’t know- we just know PopChips bought it. Hook, line and stinker.

Here are the “instructions” for the site:

snackers everywhere are uniting through their love of popchips, and we’re loving them back.
join our year of pop: show us yours by adding a video, photo, or message.
we’ll show you ours by giving you something tasty that’s worth remembering.

Wow, forget Occupy Wall Street- snackers everywhere are uniting for the year of pop and they’ll give us something? Hmmmmm. 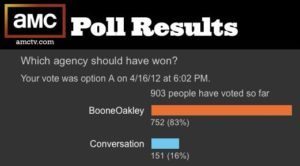 The numbers say it all. 85% believe Boone Oakley should have won.

Lesson to be learned:

If you are looking to hire an agency, we have determined the best possible tool to assist you in making the right choice isn’t a pitch, or a pitch consultant- it’s an impromptu site visit. Go hang out at the prospective agency HQ and see what kind of people they have working there. See how the work is made. Figure out if these are the people you want to have a long-term relationship with and work closely with. Because when all is said and done, you aren’t buying a campaign, you’re getting married to a creative partner.

We weren’t the only ones who through Boone Oakley were the victors- the AMC poll was running 85% in favor of Boone Oakley over Conversation.

We’re sure Boone Oakley will benefit from being seen on The Pitch. We know that Pop Chips thinks that they got their value out of just being on national TV for an hour. Unfortunately, the people at Conversation and at PopChips can’t keep posting their PopChips rah rah on the year of pop for a whole year, so once we post this, we’ll make sure to add it to the Year of Pop to help out- and then go eat some chips that we know why we buy them- not because we’re uniting through our love of PopChips- which, btw- I’ve never seen in a store- or had a reason to try to buy. And I still don’t know if they actually taste good or are healthier than regular chips- so much for advertising.