The JC Penney rebranding strategy of "Fair and Square Pricing"

by Next Wave Team | Jun 17, 2012 | Brand Relevancy, Differentiating Your Brand, The Next Wave in Business | 7 comments

There is a difference between selling Apple products and clothes. Ron Johnson, formerly Apple’s retail chief and the new CEO of JC Penney is finding that out quickly. Critics of his move from constant sales to an always fair pricing strategy are having a field day with a Forbes article calling it an “Epic Rebranding Fail”

But nevertheless they launched “Fair and Square Pricing” whereby promotions and sales would be a thing of the past, for the most part, and in their stead would be everyday prices, “best prices” which would be available to consumers on the first and third Friday of each month, plus they would mix in some month-long values, too.

The new tagline ”Enough. Is. Enough.” would speak to the belief that consumers were inundated with promos, coupons and sales and what they really wanted was just plain, old-fashioned, everyday low prices.

No sizzle, just the steak.

It’s easy to armchair quarterback these bold moves, many (including this author) thought when Apple decided to open bricks and mortar stores it was a move in the wrong direction. Gateway had failed miserably doing the same thing- and yet, Apple is now considered the most profitable retailer on the planet. 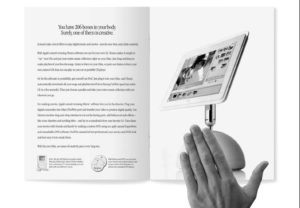 Put your hand over the logo and you still know what company made the product and the ad.

In Marty Neumeir’s classic book, “The Brand Gap” he uses Apple as the example when introducing “The Hand Test.” If you cover up the logo of the product in the ad- will you know what the product is? Apple passes with flying colors. JC Penney can’t ever do this. Their products, the brands they sell, their brand itself isn’t able to stand on it’s own. By their very nature, the department store model is nothing other than the supermarket of shopping in comparison to the convenience store. Same products, different experience in selection and purchase. There is nothing exclusive to JC Penney products and once you buy them, they belong to you- not to JC Penney. Compare that to Apple. Once you have an iPhone or a MacBook Air- the brand cachet is still there and there is a connection between you and the brand.

This seems to be the part that Mr. Johnson missed in Marketing 301. Price alone isn’t why people buy- it’s perceived value that is critical. What does JC Penney add in value to the products they sell? Well, nothing really. Do we have any reason to trust JC Penney as a qualified curator of value? Nope. They’ve been through three rebrandings in as many years- and even before that, it’s been a long time since JC Penney held any kind of unique position in the eye of the consumer- if ever. For most consumers the JC Penney brand could go away tomorrow and they wouldn’t miss it. We’ve seen it before as Macy’s has gobbled up other regional department stores, rebranded them and customers barely skipped a beat. The brand name of most department stores stands for nothing- possible exceptions being Neiman Marcus which once stood for exclusivity and expensive, Nordstrom which built a reputation on amazing customer service and Sears which had brands like Craftsman, Kenmore and Die Hard that stood for solid American values.

JC Penney is a brand without a position. And since brands aren’t controlled by the marketer, but by the consumer, the way they introduced their new positioning of the brand has been way off target. Pointing out that consumers are tired of being assaulted with ads promising values based on inflated initial pricing is true. Focusing on the competition isn’t usually the best way to spend your advertising dollar. Yes, consumers know that MSRP is a joke, and from diamonds to donuts, everyone wants to pay less- but, are always willing to pay a little more for perceived value. Where is the value proposition for JC Penney?

The Value of “Fair and Square Pricing”

We believe in fair honest prices. When gasoline is sold for dollars per gallon, it’s insane that we still see $3.59.99 prices, especially when the penny, the 1cent piece, is on the verge of being done away with.  The old psychology of .95 or .99 cent pricing to erase perceptions of whole dollar prices being more may still work with the geriatric set, but younger consumers are less likely to be swayed by it. The value of JC Penney not manipulating prices up and down is great- but, when buying fashion, the brand needs to stand for something. We’ve seen denim jeans elevated from durable work clothes to designer label with outrageous price tags- yet, say the word JC Penney and what emotional trigger do they hit?

Our friend Sally Hogshead lists seven triggers in her book Fascinate: Passion. Mystique. Alarm. Prestige. Power. Rebellion. Trust (well, actually, she changed Lust to Passion and Vice to Rebellion just to be absolutely correct). You can find out more about the seven triggers here: The Fascinate System If JC Penney is going to rebrand and be relevant to the consumer, they need to at least score highly on one or two of the triggers. right now, they don’t. Is “Rebellion” against sales and manipulation enough? Hardly, Walmart and Target have been promising some sort of everyday low prices for years.

The “Enough. is. Enough.” line is more about the mendacity of marketing than about the value to the consumer. The TV spot introducing the new pricing is enough to instantly annoy a viewer who already views TV commercials an intrusion to their entertainment.

It will take JC Penney more than a few quarters to transform themselves into a value retailer, which many consumers may find attractive as they grow to understand it. Think about how most department stores are deployed- in a mall with several other competitors. Shoppers go to the mall to find fashion, after looking in Macy’s, Sears, and the other two anchor stores, as well as places like The Gap, Hollister, Abercrombie & Fitch, Aeropostal etc Penney’s may win over converts if they can get consumers to come through their doors to compare. Changing the experience of shopping can take time and while the pundits are quick to write this concept off, once JC Penney finds its new voice and can trip one or two more emotional triggers, they may find the success they are seeking.

Knowing what your brand stands for in the consumers head is the first step to making the sale. Since the consumer controls your brand, changing those perceptions isn’t an overnight or several quarter effort. We believe that Mr. Johnson has the right tactic but needs to find the strategy to convince customers that the value of “Fair and Square Pricing” is more than just saving a few bucks- it’s a statement above fashion about fashion.

Yes, consumers are tired of being lied to, but, they still want the mirage of an oasis beyond the doors to your store.

When wearing clothes from JCPenney becomes a fashion statement (I have the common sense not to be gullible), JC Penney will win.