[contains spoilers] We here at The Next Wave have our opinions about the second episode of AMC’s The Pitch. While we all look forward to each new episode, we also realize that the reality of advertising and the “made-for-TV” version of it are quite different (as is the case with all reality TV).

This episode features two ad agencies, SK+G from Las Vegas and The Ad Store from New York. They are competing against each other to land Waste Management as a client. You can buy the show or the season on iTunes The Pitch, Season 1 - The Pitch and follow along as we watch 15 agencies work to win 8 accounts (The Ad Store went twice).

We felt that episode 2 was more interesting than the pilot. The “Ah-hah” moment when The Ad Store’s Paul Cappelli came up with the brilliant “Trash Can…” positioning reminded all of us in the biz how great it feels when you get it right and know it.

Of course- when the client falls for dreck from the competition, we can also relate.

We recorded our conversation after the show- and made a podcast and then tried to edit it to 3 minutes to get a feel for what happens with the show. We’d love to hear what you think- and why you agree or disagree with us.

You can listen to full, unedited audio of this discussion here (26 minutes):
[podcast]https://thenextwave.biz/wp-content/uploads/2012/05/the-next-wave-pitch-ep-2-podcast.mp3[/podcast]

What is becoming apparent after two shows is that the clients willing to put their brands up to this are already uncertain with their own marketing. Buying into a one hour “reality TV” stunt will get you an hour in the spot light, but the question that should be asked is who’s watching and if that’s your market. Reaching all the ad pros in America probably isn’t your target market (although if you were an agency pitch consultant it might be good to put your ads on the air).

The agencies are getting exposure that will propel them into their 15 minutes of fame- for some this is good. The twist of coming out on National TV by Cappelli was unexpected- and none of us saw that coming. The bickering between the two SK+G ECD’s was painful to watch. Word online is that Ray Johnson has left Las Vegas for Chicago, although his resume isn’t updated yet. Talking about the miscues of SK+G in this episode would be a rather long post. We’d rather concentrate on the strategic issues that were missed.

The brief from the people at Waste Management was poor.  “Making people aware of why we’re different” is unfocused and doesn’t identify which people. Why do they want to “create awareness that Waste Management converts waste into energy” - is it to grow market share, increase recycling? They don’t say what their goals are. The words “viral” and “edgy” should never appear in a brief. The value of Agency Search Consultants is becoming very apparent watching these two clients give their briefs. To give the agency the job to tell the client where they are going isn’t something you do on a first date- it’s something you discuss after you’ve worked together and the agency fully understands the clients DNA and has earned the client’s trust. One week prep is what you do for a fire sale, not a corporate strategy.

We’re not privy to budgets or the resources that the client will make available to the agency, but we felt that the emphasis for a company with an amazing infrastructure of trash trucks, waste containers and employees across the nation was a missed opportunity that neither agency suggested in their presentation.

It’s here where ‘Trash Can…” power this and save the planet etc. became powerful. Not with a guerrilla sign in trash heaps campaign, but printed on every trash can that carries the WM logo. On the sides of their trucks- they have a fleet of roving billboards. Here is a low cost place to start communicating the idea that “Garbageispower.com” which The Ad Store was linking to. This isn’t a campaign where “new media” should be the lead.

The SK+G winning concept of “Waste into WOW!” with it’s reuse of the award winning  Reporters without Borders concept of using a QR code and a smart phone to make celebrities??? talk trash? was painfully bad. How much does WM want to spend on print ads - and what celebrities were going to sign up? Trash talking sports stars or trashy d-list celebs?

The “manifesto” video that SK+G presented that “brought tears” to Lynn Brown WM VP of Corporate Communications was another derivative work and although it was a quickly produced agency ripomatic- it’s only window dressing and a one-shot corporate feel good piece that doesn’t solve the long term marketing problem of changing perceptions. 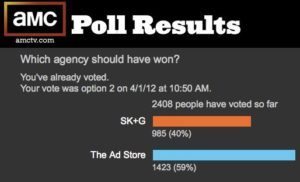 The Ad Store wins the poll

Ultimately, we believe the wrong agency won, as do other ad pros who’ve weighed in on multiple sites. When we went to vote on the AMC Poll- (which went from almost 65-35 to 60-40 since I first voted) shows that a majority of people who were willing to vote picked the Ad Store as well.