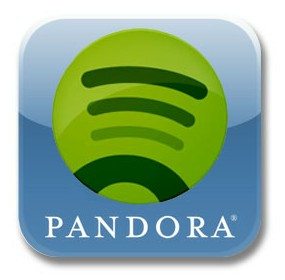 In the Internet radio wars we have newcomer, the Swedish Spotify vs. the US based Pandora. Usually, the first mover has the advantage, but in the incredibly fickle world of music powered by technology, being the new kid on the block may give you an advantage to roll out a different flavor faster.

If you are a Spotify Free user, you have probably heard the ads about how the company rolled out free mobile radio similar to Pandora where users create stations based on artists and/or songs.

Our latest app features free radio - the only radio where you can save the songs you love. Now you can discover, save and enjoy an unlimited amount of music on the go.

Here’s how it works
Create stations based on any song, artist, album or playlist, and let Spotify bring you one great song after another.

When you like a song, give it a thumbs up and it’ll be saved to a Spotify playlist on your desktop. So you can listen whenever you like.

Get busy with your thumbs
By liking songs, you’ll help to personalize your stations – meaning they’ll play more of the music you want to hear.

Premium users can enjoy a premium radio experience that’s ad-free. Free users, you’ll hear occasional ad-breaks just like you do on your desktop.

So get the free app now to enjoy mobile radio - Spotify-style!

Free radio in all its glory

From Introducing mobile radio you can save

Does this mean that the end is near for Pandora?

Taking a quick look at both of them, they have a few more differences than similarities. Spotify has the ability for users to pick and choose the artists and songs they want to listen to on demand for free on computers ($9.99/month on mobile devices), whereas Pandora does not. With Spotify’s new radio function, which works similar to Pandora, users can “star” or “thumbs up” songs to save to them on the Spotify app and listen to them whenever they want. It’s likely that this will make Spotify reign supreme in the world of internet radio. Where Pandora users are used to constantly giving thumbs up or down to songs, Spotify users can simply thumbs up a song then listen to it whenever they want.

Beyond features, Spotify appears to have much better social media integration than Pandora, especially with Facebook. In fact, Facebook integration was an obvious focus for the Swedish company; users with the Spotify app enabled have their activity displayed on the timeline and can share songs and playlists. It should be noted that Spotify forces users to sign up through their Facebook account whereas Pandora does not, but this quirk is made up for by the flawless social media integration.

Considering the ultimate goal is to be able to deliver highly targeted ads or get paid to be the end users only music source, none of this is good for old fashioned terrestrial radio which failed in every way to react and adjust to the changes the Internet has forced on them. It will be interesting if at some point, Pandora and Spotify will find a standard for selling ads so that local businesses can target their most likely customers.