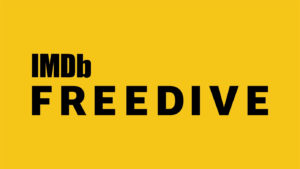 Listening to APM Marketplace discuss the announcement of the new Amazon Freerive service that’s teamed up with IMDB, they talked about the value to Amazon and the content providers through ad support. Trust us, this has nothing to do with ad dollars coming in, but more about acquiring more data about potential Amazon shoppers who may not be buying from Amazon now.

Amazon spends a lot of money with Google for ads now to drive sales, and what Freedive does is gives them yet another way to refine data about people who aren’t in their ecosystem due to cost. Amazon Prime isn’t for everyone. And there is a large part of America that can’t afford Netflix, Hulu, and all the other streaming services, yet still have a cell phone. Netflix has partnered with T-Mobile to offer free Netflix to it’s subscribers, and with the impending merger of T-Mobile with Sprint, Amazon may have to renegotiate wireless partners - Kindles used to be connected via Sprint but are now with AT&T and Prime can be bundled with Sprint Cell service. It’s starting to get messy.

But, the fact remains, the number one advertiser on Freedive will probably be Amazon, which already sells ads on their platform to manufacturers and retailers- and may bundle in ads on Freedive. Ultimately, Amazon still understands that ad supported content has value- especially when driven by digitally connected devices. Freedive is the future of broadcast television- with consumer level targeting of ads, with instant feedback. The real question is will they allow you to skip an ad to replace it with one you are interested in? That’s the holy grail of targeted ad platforms.

Amazon understands that while subscriptions are great for somethings, after a while, your subscriptions will start to show up on your credit report at the rate we’re going. You subscribe to software like Adobe Creative Suite or Microsoft Office to work, you subscribe to an ISP to provide the data, you subscribe to Netflix for movies, Prime for shopping, a wireless company for cell service (note- 5G could kill off ISPs) Dollar Shave Club for razor blades, Blue Apron for meals, the list goes on.

At some point, consumers can only bear so many monthly bills outside of rent/mortgage, utilities, insurance, transportation expenses etc.

Ad supported media may be making a comeback. Freedive isn’t the first and won’t be the last. At some point, Facebook may suffer some rejection by users who aren’t being compensated for their content on the platform. And while Netflix is a subscription- an ad supported version may not be far off.

That this is teamed up with IMDB and not clearly an Amazon product is another stroke of smarts. IMDB is an incredible viable and valuable online community where the contributors share knowledge willingly without compensation. This service only rewards them and helps support their site. One day, Wikipedia may have to look at this model as well.

When Amazon’s CEO Jeff Bezos bought the Washington Post and offered subscriptions for $100 a year (and a discount to Prime Members), it should have been viewed as just another way to connect consumers with the retail giant and providing data for targeting. At half the price of the NY Times, the difference becomes that the owners of the NY Times don’t have a mega-advertiser subsidizing them. Look for Amazon/Bezos to expand their newspaper holdings to gain eyeballs for Amazon ads.

Ad revenue might be driving the bottom line for Facebook and Alphabet for the folks on Wall Street- but, the real goldmine is and always be the connection of data with an individual consumer for targeting. Freedive will do just fine for Amazon, even if the ad revenue never amounts to much. Increased sales for nominal extra costs are a good thing for Amazon.