Is there a Kindle in your future?

by Next Wave Team | Nov 19, 2007 | 1 to 1 marketing, Change the world, Differentiating Your Brand, Future of advertising, Future of TV, Marketing & the Web, Personalization of Advertising, Retail | 0 comments 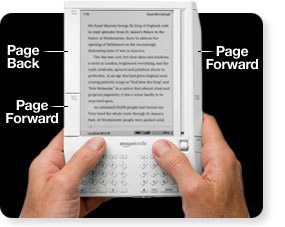 Remember, people scoffed at the first iPod, $500 for an MP3 player. They ridiculed the video iPod- “Who is going to watch a movie on that small screen, and pay $1.99 for a tv show I could watch the night before for free- puhlleeezeeeeee”

Well, we know what happened there. And remember, Apple wasn’t the first mover.

Today the news broke on the Kindle, Amazons entry into e-readers. E-readers haven’t exactly taken off, but then again- Sony has been hitting a bunch of singles lately, and they are behind the most successful e-book to date.

Amazon has taken the e-book to a new level, with constant connectivity via the Sprint high speed cell network, but, there are some hidden gotcha’s that make this book worth passing on - mostly, the fact that Amazon wants to charge you to upload your own data, or to subscribe to blogs. Eh, better luck next time.

Here is a brief description of the reader from the lengthy Newsweek article, which is well worth reading:

Amazon: Reinventing the Book | Newsweek.com
First, it must project an aura of bookishness; it should be less of a whizzy gizmo than an austere vessel of culture. Therefore the Kindle (named to evoke the crackling ignition of knowledge) has the dimensions of a paperback, with a tapering of its width that emulates the bulge toward a book’s binding. It weighs but 10.3 ounces, and unlike a laptop computer it does not run hot or make intrusive beeps. A reading device must be sharp and durable, Bezos says, and with the use of E Ink, a breakthrough technology of several years ago that mimes the clarity of a printed book, the Kindle’s six-inch screen posts readable pages. The battery has to last for a while, he adds, since there’s nothing sadder than a book you can’t read because of electile dysfunction. (The Kindle gets as many as 30 hours of reading on a charge, and recharges in two hours.) And, to soothe the anxieties of print-culture stalwarts, in sleep mode the Kindle displays retro images of ancient texts, early printing presses and beloved authors like Emily Dickinson and Jane Austen.

But then comes the features that your mom’s copy of “Gone With the Wind” can’t match. E-book devices like the Kindle allow you to change the font size: aging baby boomers will appreciate that every book can instantly be a large-type edition. The handheld device can also hold several shelves’ worth of books: 200 of them onboard, hundreds more on a memory card and a limitless amount in virtual library stacks maintained by Amazon. Also, the Kindle allows you to search within the book for a phrase or name.

My bet would still be on Apple- with a tablet style iPod Touch, or tablet Mac. Combined with the iTunes store, you have an integration that’s already proven- plus an Apple device would be able to play video- a key media tool that can’t be ignored. And hopefully, Apple won’t try to gouge you on uploading your own content- after all, it’s an Open Source world- shouldn’t you be able to upload anything you want that’s yours to your own device without paying the piper?

The big question is when does this device become cheap enough that it becomes cheaper for a newspaper to give you a reader instead of a printed newspaper? When does your choice of reading materials start serving up targeted ads? Amazon will have suggestions, no doubt- but, how will this help their partners move the sales needle?

In the mean time- what do you think? And, do you want one? Even if it is butt-fugly?