6 easy steps to an iconic brand… you wish. 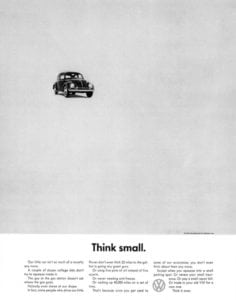 The ad that launched the creative revolution.

Very few agencies get to launch an automotive brand. Cars are special. They’re expensive, they are an outward representation of their owners personal positioning (at least in America), and automotive brands have a special place in advertising folklore. It was VW with DDB that launched “the creative revolution” with the iconic “Think Small” ad.

Notable brand launches have mostly been new luxury nameplates from Japanese companies, Honda with Acura, Inifiniti with Nissan (which had to make the change from Datsun to Nissan before this) and Toyota with Lexus. Others were GM’s creation of the short lived Saturn, Toyota with the even shorter launch of Scion, and then Tesla.

Crispin Porter + Bogusky was asked around the turn of the 21st century to relaunch the Mini Cooper in the USA- now that it was owned by BMW. They thought they had a monumental task with a relatively small budget.

In early 2001 American roads were dominated by SUV’s – the fastest growing segment – and light trucks was the most popular segment in the category. Japanese and German brands dominated the import segment and gas was $1.25. Bigger was better. Small car sales were at their lowest point in 15 years. MINI’s heritage was British, which was synonymous with unreliability in the car category.

The deck was stacked, and to top it all off, there were only 2 cars in the line, the Cooper and the Cooper S. The first step was to identify what makes a brand a brand:

We did an exhaustive study of iconic brands across a variety of categories and discovered six characteristics common to iconic brands.1. A defining signature look2. An ability to elicit a physical or emotional reaction3. A tendency to take on characteristics outside their category4. A tendency to own a unique benefit within a category or create a new category altogether5. An ability to connect with and reflect the attitudes and values of a broad user base6. A tendency to break conventions and reinvent to stay salient

From there- sort of work backwards to find the mojo. With Mini there were several clues.

The car doesn’t look like any others- it’s funky. It also is a blast to drive. They worked that into the brief: 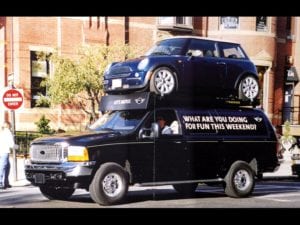 “What are you doing for fun this weekend?”

CP+B took this insight and did some testing. They created an “exhilaration scale” to clarify the price to WOW factor. And, then, they started looking for the definition of that experience.

At first they called it “going”- as opposed to driving, which was the operative industry word. Then, someone stumbled onto “Motoring” - it was driving- with a British twist- and “Let’s motor” was born. That, along with the badge, and distinctive non-traditional media, lead to a launch that out-lived some other small car brands (Scion) despite the car not excelling in the reliability or cost of ownership like the other newer brand launches.

Once they had a tagline, there were ads, and then there were stunts. Lots of stunts.

The ads were out of the box. Literally. Like putting a Mini Cooper on top of an SUV and driving it around a city. 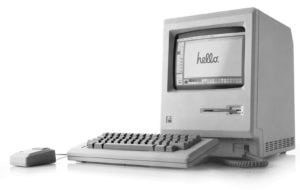 The key takeaway from this post are things we at The Next Wave preach in our tagline, Create Lust • Evoke Trust. To do that, we look at those six characteristics everyday. We search for universal truths that build easy inroads to consumers psyches, and then find a way to elicit emotion that sets your brand apart from your competition. It’s what Steve Jobs did at Apple with ease of use, putting the customer first- and creating “Bicycles for our minds” - something simple- and easy- and loved, to move people from thinking of computers as distant machines that spoke an arcane language, to “hello.”

There are other iconic brands that found a powerful voice through better positioning. We’ll list just a few.

If you’d like to discuss crafting your iconic brand, we’re here to help you find your insight and give you the tools to own your position in your industry.